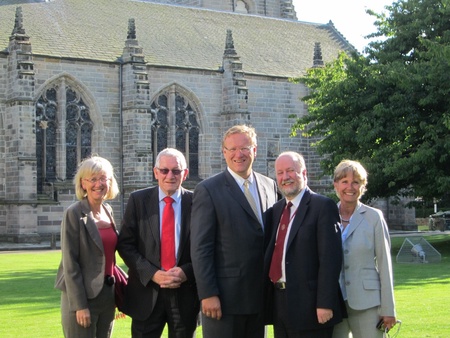 The Mayor visited the University of Aberdeen’s College of Physical Sciences, Oil History Project and Saving Sight in Grampian at the institution's Foresterhill campus, as part of the visit, to celebrate the 20th anniversary of the twinning of the two cities.

The Mayor was accompanied by the Deputy Mayor Bjørg Tysdal Moe and City Manager Inger Østensjø.

The broad aim of the twinning relationship is to use international links to provide a wide range of benefits; educational, social, cultural, sporting, economic and personal development to the people of Aberdeen.

This is ever more important in a world increasingly dominated by global issues, in which countries are increasingly interdependent.

Over the past twenty years twinning has enabled numerous community exchanges in sport, culture, education and environmental and social issues between Aberdeen and Stavanger.

Recently, there have been a number of successful arts projects including Aberdeen City Council's Arts Team collaboration with Stavanger for a trilateral youth theatre project which culminated in the play Common Thread being presented at AIYF last month (July) in which young artists from Stavanger performed.

During their visit the dignitaries from Stavanger attended the following:

Lord Provost of Aberdeen Peter Stephen said: "The relationship which has developed over the past twenty years between Aberdeen and Stavanger is very special.

"Norway and Scotland enjoy long-standing close connections not just in trade and industry, but also in educational, social and cultural domains and Aberdeen and Stavanger are at the very heart of these links."

"Our cities share a long standing heritage of maritime history and common economic development interests; however the twinning links focus more on exchanges between community groups and the cultural and social benefits these bring to the people of Aberdeen and Stavanger."