Students in the driving seat for racing success
12 July 2010 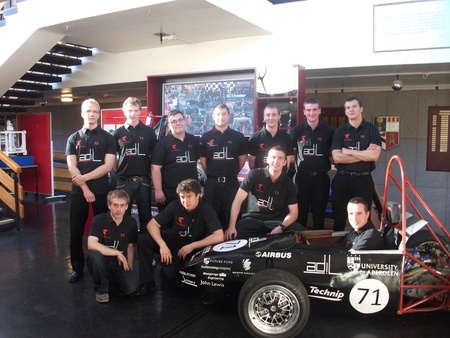 A group of engineering students are gearing up for success on a world famous race track with a car they have spent 10 months building.

The team from the University of Aberdeen will take part in the International Formula Student competition at Silverstone on Thursday (July 15).

They will compete against 100 teams from across the globe in the three day competition which challenges students to design, build and then race a formula style racing car.

The 22-strong Aberdeen group – named TAU Racing – have built the majority of the parts for their single-seater vehicle from scratch.

They will be ranked in the competition on elements including car design, economy, presentation and performance.

This is the second time a team from Aberdeen has entered the annual contest which is organised by the Institute of Mechanical Engineers.

Last year the team ranked higher than any other Scottish team, 6th in the UK and 25th in the overall competition.

Daniel Ahrens, the Project Manager for the team who has just completed his fourth year of a degree in Mechanical Engineering at the University says this year they are hoping to continue their winning streak.

He said: “Last year was the first time a team from the University of Aberdeen had entered the competition, and to come home triumphant, having ranked so highly was fantastic.

“This year we have taken what we learnt through experience and worked on making the car even lighter to optimise its performance through the dynamic events.

“We’re really excited about taking it to Silverstone and giving it our all on competition day.”

Professor Tom O‘Donoghue, Head of the School of Engineering at the University said: “The International Formula Student competition is a prime opportunity for engineering students from across academic years to work together and apply the knowledge they are gaining in their degree programmes to a real life scenario.

“The skills and hands-on experience the TAU Racing team are building through their involvement in the contest will be invaluable to them in their future careers.

“Once again this year, the team have shown great enthusiasm and dedication and this certainly shows in the racing car they have developed.”

James Paton, Managing Director of ADIL, which has been the main sponsor of TAU since its inception in 2008 said: “We supported the TAU racing team last year and we were incredibly impressed by the great enthusiasm and commitment all the members gave to the project and the fantastic result they achieved.

“Once again this year’s team is to be commended for its strong ability and commitment in creating a car from an original concept through to the finished product.

“ADIL wishes the team well at this year's Silverstone competition and we look forward to hearing the result.”

The full list of organisations sponsoring the Tau Racing team is as follows: