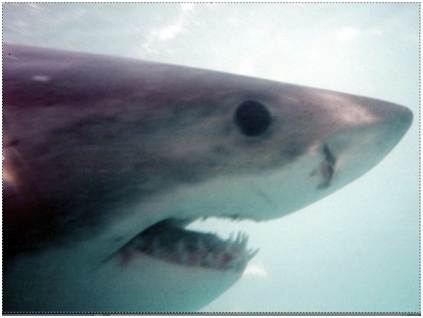 Hungry sharks, swordfish and other ocean predators have adopted different hunting behaviours depending on how much food is readily available.

They use at least two particular methods to detect their next meal, according to research published in Nature.

The findings were made by an international research team, led by Professor David Sims of the Marine Biological Association Laboratory in Plymouth and involving the Aberdeen Shark group, comprising Drs Les Noble and Cathy Jones with their PhD students Nuno Queiroz and Nick Pade - from the University of Aberdeen.

Researchers attached electronic tags to 55 individual fish from 14 different species of shark, tuna, billfish and ocean sunfish. They monitored the movements of these predatory ocean wanderers to test whether or not they show predictable behaviours in the face of changes in food availability.

"Theory predicts that predators should stay local where food is abundant, but when it becomes diminished, they should adopt a movement pattern known as a Lévy flight to optimise searches for targets at unknown locations," said Professor Sims.

A Lévy flight is a mathematical 'walk' pattern characterised by giant steps (long, straight movements) interspersed by smaller steps. By using this search pattern the fish are able to increase their chances of finding new food patches, however widely scattered they may be.

The researchers collected detailed movement data by tracking the fish as they encountered different habitats in the open ocean, from productive zones - such as those around the Galapagos Islands - to more food-limited areas.

Professor Sims said: "In much the same way as treasure-hunters use metal detectors, the fish have developed different ways of scanning the oceans in search of their next meal. Where food is plentiful they remain in that area, searching at a leisurely pace as they almost stumble across their 'finds'. When the source becomes sparse they take giant steps that conform to a Lévy pattern to find a new location where they might have more success."

Dr Noble said: “Although these observations tell us Lévy movements occur in free-ranging animals we’re still a long way from determining how these movement patterns arose in the first place, and why.” “That will require controlled experiments, preferably on more tractable animals,” said Jones.

Professor Sims added: "The results of our study enable predictability of movement patterns of fish under decreasing prey conditions, as might be expected with environmental changes such as fishing depletions or climate change. This knowledge should help us to manage fish stocks more efficiently in the future."

The importance of these findings will reach far beyond marine biology. If distantly related fish have naturally evolved search patterns approximated by a Lévy walk, it seems highly likely that other animals, and possibly even people, can adopt similar behaviour in response to environmental changes.

‘’If it’s a useful adaptation then it’s unlikely to be restricted to a particular animal group. Incorporating knowledge like this on how animals move in relation to resources might explain some seriously anomalous present day distributions, and allow prediction of future ones,” said Dr Noble.

Archaeological and genetic evidence points to the rapid colonisation of new lands by human hunter-gatherers. The study by Sims and colleagues could indicate that Lévy-type behaviour might have evolved naturally in these early humans as they adapted to finding better conditions and sources of food.

The research is funded through the Oceans 2025 programme.