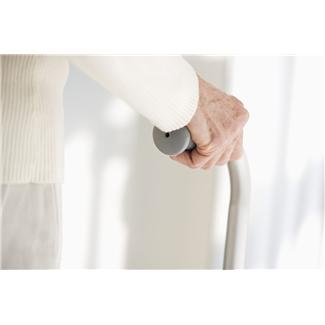 Elderly women with a common gene variant may be more prone to falls, University of Aberdeen scientists have discovered.

Research published online in the Journal of Gerontology: Medical Sciences shows for the first time that a variant of the gene ACTN3 – already linked with muscle strength and power in elite athletes – is a risk factor for falling in older females.

But the scientists stress that falls are caused by a wide range of factors and that having this gene variant alone is not enough to cause elderly women to tumble.

All of us have two copies of the ACTN3 gene - inherited from our parents - which affects how the ACTN3 protein is expressed in muscle fibres, which in turn affects muscle power and strength.

Just 30% of the population have two copies of the gene that are fully functioning.

The rest of us have non-functioning variations of this gene – either one or both of our two copies will be a variant and will not produce protein. But this makes no difference to our day to day lives.

However researchers have now discovered that elderly women with the gene variant are more at risk of falls, irrespective of whether they have one or two copies of the non functional variants.

They found that women with the gene variant were on average 33 per cent more likely to fall than those with two fully functioning copies.

Dr Lynne Hocking, Research Fellow within the Musculoskeletal Research Group, at the University, said: “This is a first step towards identifying groups of people who are at high risk of falling. However it is only a first step and having this gene variant is not enough on its own to cause women to trip over.

“Our study provides further evidence that people can be genetically predisposed to falls. It is not just circumstantial, environmental or due to other factors such as medication they might be taking, or other existing medical conditions, that can cause women to fall.”

Falls are a common and costly problem among older adults. More than a third of people over 65 fall each year, and half of those suffer recurrent falls. Some falls are fatal; others can result in fracture, injury to internal organs and brain injury, as well as leaving the sufferer with a fear of falling.

Falls among the elderly are estimated to cost £581million per year in the UK and prevention of falls is an important objective in public health.

Robert Judson, a PhD student within the University of Aberdeen’s Musculoskeletal Research Group, was also involved in the research.

He said: “The ACTN3 gene we investigated has already been shown to be important to elite athletes. A study of top Australian power athletes showed that almost all had fully functioning copies of the gene which seems to give one or two per cent more of the muscle power needed by the fastest sprinters and athletes.

“Separate research has also linked the gene with variation in muscle performance in the general population across all age groups.

“This previous research prompted us to look at the clinical implications of the ACTN3 gene. Since strength and power are major contributors to falling in the elderly, we wanted to see if this gene variant was a risk factor for falling.

“Although we have found that to be the case further work is now required to try to find out how the gene variant exactly works and what age group our finding is most relevant to. There is also a need to establish the other potential genetic risk factors for falling.”