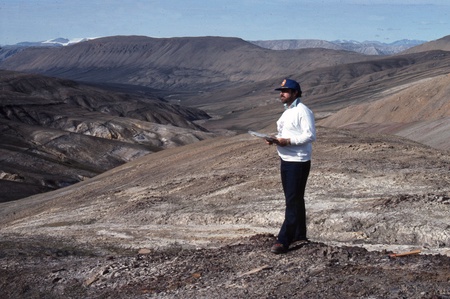 An Aberdeen geologist is set to travel to one of the world’s largest islands to build a better understanding of its mountainous landscape.

Dr Randell Stephenson, Reader in Geophysics at the University of Aberdeen will depart for Ellesmere Island on the Arctic Ocean margin later this month.

His trip marks the beginning of a two year data gathering mission, to develop a picture of how movements below the Earth’s surface have shaped the island’s landscape, which is the most rugged of the Canadian Arctic islands.

The total population of Ellesmere Island is less than 200 inhabitants, with temperatures dropping to minus 40 degrees Celsius in the winter months.

Its highest mountain is Barbeau Peak, standing at 2,616 m above sea level.

Dr Stephenson will spend two weeks travelling across the island - which is approximately the same size as the UK and experiences 24 hour darkness for 6 months of the year - installing eight seismometer stations.

These stations will detect the seismic waves produced by earthquakes across the globe and their response to the interior of the Earth beneath Ellesmere Island.

The information gathered will provide a crucial insight into the interior structure of the Earth in this area, and allow scientists to test ideas about what caused mountains to form on the island, and when this took place.

Dr Stephenson, who will make the trip with colleague Colin Taylor, a technician from the University’s School of Geosciences, said: “The aim of this project is to gather fundamental information on the lithosphere of Ellesmere Island. This is the top 100km or so of the Earth’s interior, made up of the crust and part of the mantle – the top brittle part of the Earth’s interior and the thick more ductile shell below.

“We’ll use the seismometer stations to record the seismic waves that are created by earthquakes as they happen across the globe, and travel through the Earth to emerge on Ellesmere.

“The data we gather over the two year period will provide us with a picture of what the Earth’s lithosphere beneath Ellesmere looks like – its thickness and something about its composition.

“By understanding what is going on below the surface, we can better understand what caused the surface of the Earth to look as it does – the mountainous landscape which Ellesmere is known for today.

“The Earth’s landscape is ever evolving, so understanding the roots of how its topography was built is an important tool in helping us chart how it is changing now and in the future and how this might impact upon how we use it and live on it.

“The geological history of the part of the Arctic Ocean between Canada and Asia is one of the least known anywhere on earth and we think that anything we can learn about the Canadian polar margin along Ellesmere Island will also help us make better links with the geology of Greenland and the other parts of the Arctic margin.”

The project is funded by the University’s School of Geosciences with support from Natural Resources Canada’s Geological Survey of Canada.

The Natural Environment Research Council (NERC) has donated the equipment which will be used to build the seismometer stations.