Future of Aberdeen transport to be discussed
10 June 2010 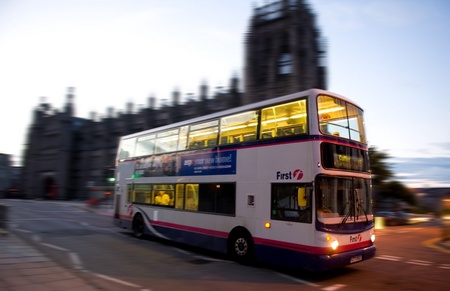 A vision of what Aberdeen’s transport infrastructure could look like in the future will be discussed today (Thursday June 10).

A meeting hosted by the University of Aberdeen’s Centre for Transport Research, will bring together key representatives from Aberdeen city and shire’s transport sector.

A paper by leading transport experts from the University, which outlines suggestions for improvements which could be made to the city’s transport systems, will be amongst the topics up for discussion.

The paper also outlines lessons Aberdeen could learn from transport systems and initiatives developed in other European countries.

Professor John Nelson, Director of the University of Aberdeen Centre for Transport Research, said: “The meeting will bring key representatives from the local transport sector together and stimulate an informed debate about the crucial role of transport in the future development of Aberdeen and the surrounding area. We want to put transport at the heart of discussions on planning Aberdeen's future.

“The discussion paper developed by the Centre for Transport Research to highlight the transport issues facing Aberdeen and how other European cities have successfully tackled similar challenges will be one of the main points of discussion.

“The overall objective of this paper is to progress and communicate the process of change that will transform Aberdeen into one of the world’s leading cities of the future as well as promoting the excellent work already done by existing stakeholders locally.”

Representatives from Nestrans, Aberdeen City Council, Aberdeen City and Shire Economic Future (ACSEF), First Group, and Aberdeen Harbour Board will be amongst those attending today’s meeting which takes place in the Linklater Rooms on the University’s King’s College campus.