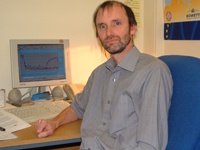 The University of Aberdeen will contribute to the award-winning Festival of Politics, which gets underway in Edinburgh today (August 17).

Professor Julian Mercer, head of obesity research at the University of Aberdeen Rowett Institute of Nutrition and Health, will take part in a panel discussion on the Science of Eating.

The debate, at 4pm today, will look at the root causes of Scotland’s over-eating epidemic asking whether it is greed, the availability of food, societal pressures or more subtle physiological mechanisms which have resulted in the growth of the nation’s collective waistline.

The panelwill also question why some people are naturally slim while others struggle to control their weight, whether food itself may be the answer to the epidemic, and how your brain knows what you are eating.

On Thursday (19 August) the debate will move to The Politics of Devolution with an event in association with the AHRC Centre for Irish and Scottish Studies at the University of Aberdeen.

They will consider the big issues for the future of politics in these territories and their relationships with Westminster.

On Friday, the University will support The Royal Stewarts – a precursor to the forthcoming exhibition on the Jacobites at the Parliament.

Leading Scottish author Allan Massie will delve into the subject of his latest book The Royal Stuarts examining the story of the family that was arguably one of the greatest players in Scottish and British history.

The events held in association with the University of Aberdeen form part of a packed programme which feature famous faces, such as journalist and campaigner Martin Bell, political commentator Peter Kellner, and political elder-statesman Sir Malcolm Rifkind QC MP.

Now in its sixth year, the 2010 Festival will also include musician and campaigner Annie Lennox who will return to Holyrood in two supporting roles - as a special envoy to the Scottish Branch of the Commonwealth Parliamentary Association, and as a key speaker in the festival.

John Prescott,who was Britain’s longest serving Deputy Prime Minister, will be discussing his 'Life in Politics' while political campaigning comedian and Perrier award nominee Mark Thomas will take part in adiscussion on the public’s involvement in politics.

For full details of the programme visit www.festivalofpolitics.org