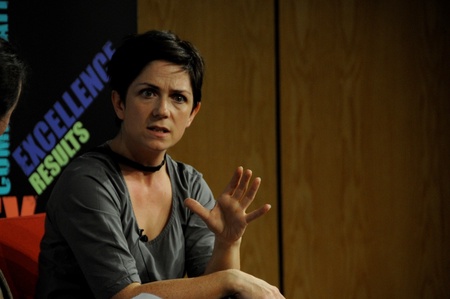 The 10th Word proved a cause for celebration with sold-out events and record crowds to mark a decade of the Festival.

Attendance at Word events was in excess of 11,000 as visitors descended on the King’s College Campus, University of Aberdeen, and venues around Aberdeen City and Shire for an energetic three-day mix of readings, debate and discussion.

Following on from the high spirits of Saturday – when big names such as Pauline McLynn, Karen Dunbar, Martin Bell and Simon King – performed to full houses, today (Sunday May 16) saw Word tackle some of the biggest questions of the day.

A panel of leading writers and political commentators came together to consider the current climate in the UK and debate the future for Scotland in the Politics and Power.

Also under the spotlight at Word was the obesity crisis in Fat Matters – an interactive discussion with contributors to the book of the same name – which looked at whether the ‘ideal’ female body is achievable.

It provoked lively debate as the panel considered whether calorie counting and all those hours in the gym really pay off.

Also topping Sundays bill were author Denise Mina, described as ‘the Crown princess of Crime’ and David Peace, who penned the Red Riding quartet and The Damned United.

The curtain came down on the Festival with a final performance of Scottish Opera’s Five:15 series.

The mini operas, which had their world premiere at Word yesterday (Saturday May 15) were received with appreciation by the Elphinstone Hall audience.

Word artistic director, Professor Alan Spence, said: “The sheer energy of the Festival has been amazing and there has been a real buzz around the campus on all three days.

“For the first time ever I cannot pick a stand out event because there have been so many highlights – everything was fantasic.

“The success of this year’s Word is fitting for our 10th anniversary and shows just how far this festival has come in the last decade.”