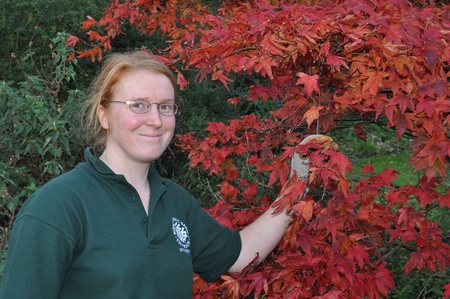 It’s all coming up roses for Kate Barnard – the first horticultural student supported by the Friends of the Cruickshank Botanic Garden.

Kate - whose Friends’ bursary is funding her 12 months at Old Aberdeen’s historic Cruickshank Botanic Garden - is delighted at the accolade.

“I was really surprised when I heard that I had been chosen for this prestigious award. It is a real honour to be recognised in this way,” she said.

Kate’s work in the garden has included updating the database of all its many plants, revamping the sunken garden and general maintenance.

Professor Ian Alexander, Regius Chair of Botany, is Keeper of the Garden which is partly owned by the University of Aberdeen.

He said: “It is tremendous that Kate has been named Scotland’s Best Horticultural Student, and that we were able to attract her to Aberdeen. She has certainly been a great addition to the team who look after the Cruickshank Botanic Garden.”