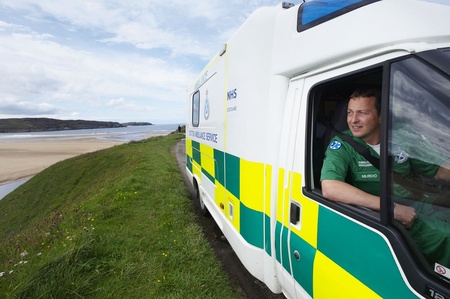 The people of the Highlands are to feature in a photographic exhibition in Inverness celebrating the 10th anniversary of an academic research unit serving the region.

The Centre for Rural Health was established in 2000 by the University of Aberdeen and, since 2005, has operated as a highly successful joint venture with UHI, the prospective University of the Highlands and Islands.

Pictures by Inverness-based photographer Ewen Weatherspoon bring to life some of the community projects being conducted by the centre.

Ewen has captured local people, including doctors and nurses, mountain rescuers, school children, crafts people, crofters and fish farm workers, at work and play in four areas - Kilchoan at the tip of the Ardnamurchan peninsula, Achiltibuie in Wester Ross, Fort William and across Sutherland.

Researchers have been involved in several initiatives. They include the Remote Services Futures project to involve local people in planning their future health services, and the O4O (Older People for Older People) scheme. The O4O team is working with communities to develop services for older people, helping them to live in their own homes and areas for longer.

The photo exhibition will be officially opened on Tuesday May 4, at the Centre for Health Science, Inverness, by mother-of-two Rosie Curtis of Kilchoan, manager of the local Laga Fish Farm and a retained firefighter. She has been involved in the Remote Service Futures project, headed by researcher Amy Nimegeer.

Mrs Curtis said working on the project had been enjoyable and an eye-opener for the people of Kilchoan. “My community is very remote – it’s an hour before an ambulance can get to us and the nearest doctor is 45 minutes away, so it is important for us to get involved in planning for the future. The project was well worthwhile and lots of good things are happening from it.

“We’re very fortunate with the services we have got at present but they will have to change. It will be a challenge but it is up to us to get it right – otherwise we won’t be able to keep young and older people in the community.”

Professor Jane Farmer, UHI co-director of the Centre for Rural Health, said: “We felt an exhibition of photos would be an excellent way to mark our anniversary and to bring our projects to life through the wonderful people of the Highlands. Ewen’s vibrant pictures show there is life in our remote and rural areas, and people can enjoy a good life if everyone works together to sustain these communities.”

The exhibition opens to the public from May 5 to May 28 from 9am to 5pm, Monday to Friday, at the Centre for Health Science in Inverness.