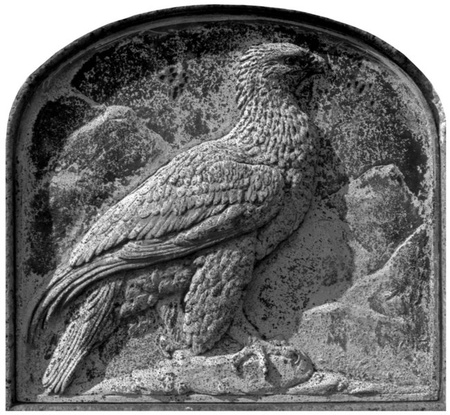 The Edinburgh grave of one of Scotland's greatest naturalists has been vandalised and a valuable bronze plaque stolen.

Former University of Aberdeen professor William MacGillivray died in 1852 and laid in an unmarked plot in the New Calton Burial Ground until 1900 when a memorial was raised by former students and admirers.

A bronze plaque based on a painting of a Golden Eagle by MacGillivray was inserted into the nine foot tall pink Peterhead granite stone erected at that time. The metalwork was commissioned from David Watson Stevenson RSA, a well known Scots sculptor.

Dr Alan Knox, Head of Museums at the University of Aberdeen visited the grave last week and found the grave stone damaged and the plaque stolen.

Dr Knox said: "It's very sad. The stone stood untouched for 100 years and now this memorial to a great man has been vandalised.

“As an ornithologist, MacGillivray was without equal. He lived a hard, inspirational life. He was a much-loved teacher and wrote prolifically to help support his large family.

“We understand that the theft of this plaque is only one of a number of similar incidents to strike Edinburgh burial grounds in recent years. It is disgraceful that this should happen."

When he was a student, MacGillivray regularly walked across Scotland from Aberdeen on his way home to Harris in the Western Isles, and he walked from Aberdeen to London, via the west coast, to visit the museums there in 1819.

MacGillivray was an exceptional field naturalist and has been described as the first professional ornithologist.

His collections helped establish University of Aberdeen’s Zoology Museum, and many of his plants are still in the University's Herbarium.

When he was conservator for the College of Surgeons in Edinburgh, MacGillivray worked closely with his friend, the famous American bird painter John James Audubon.

The manuscript of MacGillivray's last book on the natural history of Deeside was purchased after his death by Queen Victoria and privately published by her. MacGillivray has many admirers to this day, and there are birds named after him in North America.

It is not known when the theft took place. Photographs taken in the last 10 years show the gravestone with only minor damage from a previous attempt to steal the plaque.

The plaque is about 32 cm wide by 30 cm high, with an arched top and carrying a large standing Golden Eagle facing right. Anyone with information about its present whereabouts is asked to contact Lothian and Borders Police on 0131 311 3131, or the University of Aberdeen's Museums on 01224 274301 or museums@abdn.ac.uk.