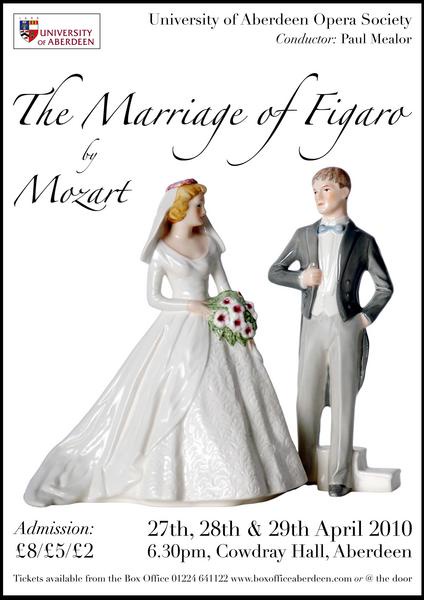 The University of Aberdeen’s Opera Society will make its debut performance with Mozart’s The Marriage of Figaro tomorrow (April 27).

Students at the University have spent the last four months perfecting their pitch, ensuring their falsetto is flawless and ironing out their Italian.

The society was formed in October 2009 by fourth year music student Kirsten Beach and will perform for the first time with a three-day run at the Cowdray Hall, Aberdeen.

Kirsten said the society was set up to address a gap in the options for classically trained singers and performers at the University.

“There were plenty of choruses for us to join, but the only chance we got to perform theatrically was the Gilbert and Sullivan show which is put on once a year,” she added.

“The main purpose of the society is to provide students with an opportunity to be in a fully staged opera, not only to sing and act but to choose what we perform, and to challenge ourselves and push ourselves to the limits of our abilities.

“It has been hard to get to this point, but we are finally putting on our first show, The Marriage of Figaro, which is a great comic opera by Mozart.

“The entire cast is very excited, and it has been an amazing learning experience for all of us. Now everyone is jumping to know what we will do next year.”

The Marriage of Figaro, sung entirely in Italian, is a witty and powerful account of a single "day of madness" (la folle giornata) in the palace of the Count Almaviva near Seville, Spain.

Count Almaviva is a scheming, bullying, skirt-chasing baritone.  Having gratefully given Figaro a job as head of his servant-staff, he is now persistently trying to obtain the favours of Figaro's bride-to-be, Susanna.

He keeps finding excuses to delay the civil part of the wedding of his two servants, which is arranged for this very day.  Figaro, Susanna, and the Countess conspire to embarrass the Count and expose his scheming.

He responds by trying to legally compel Figaro to marry a woman old enough to be his mother, but it turns out at the last minute that she really is his mother.  Through Figaro's and Susanna's clever manipulations, the Count's love for his Countess is finally restored.

Dr Paul Mealor, senior lecturer in music at the University of Aberdeen, will conduct the orchestra for the performance. He said the students, many from the department of music with others from disciplines across the University, had reached an impressive standard.

“This is one of the most difficult operas ever written but it is really fun and a great piece,” he said.

“The Marriage of Figaro is three hours long and sung entirely in Italian but the students have really got to grips with it.

“It is amazing that the University of Aberdeen’s student body is able to put on a performance like this as the opera is usually tackled by professionals.

“I am sure the audience will be delighted by the high standard of the performance.”

The Marriage of Figaro is at 6.30pm on Tuesday April 27, Wednesday April 28 and Thursday April 29 in the Cowdray Hall, Aberdeen. Tickets £8 (adult concession £5 / student and child concession £2) available from the Aberdeen Box Office http://www.boxofficeaberdeen.com/or 01224 641122