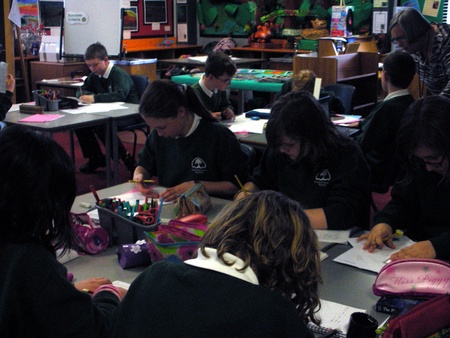 Exercise can benefit a child’s ability to concentrate in class, a study of more than 1,000 Aberdeen schoolchildren has found.

Researchers at the Universities of Aberdeen and Leeds discovered that children who undertook moderately intensive exercise performed significantly better in tests of concentration than those who hadn’t done the exercise.

The team say their findings - published in the journal Developmental Medicine and Child Neurology- have implications for the debate about exercise in schools.

Dr Justin Williams, Senior Lecturer in Child and Adolescent Psychiatry at the University of Aberdeen said: “This is the first and largest study of its kind and our results show that 15 minutes of exercise in the classroom improved performance on cognitive tests conducted later in the day.

“While further research is required, this could change the way we think about exercise in schools. As well as being important in tackling obesity and promoting a healthy lifestyle, exercise can help with learning.

“It also raises the question of how much the often-reported decline in children’s attention span in modern day life stems from a lack of physical exercise.”

“How exercise helps children to concentrate is not yet clear and future research is needed to determine the brain mechanisms involved. But however exercise works, this research is important because it suggests that exercise in schools might actually help academic learning.”

The study was conducted in six Aberdeen schools* involving pupils in primary classes four to seven.

It was prompted after local PE teachers asked the University of Aberdeen child health scientists whether physical activity could make a difference to school performance.

The researchers devised a study to find out whether an exercise that could be practically delivered in the classroom could make a difference to academic performance.

The PE teachers created a series of aerobic exercises lasting 10 to 15 minutes that were just vigorous enough to get the children beginning to sweat and a little breathless These exercises, which included running on the spot and hopping to music, were then taught to class teachers.

Meanwhile, to measure concentration in a realistic classroom environment, the researchers came up with a series of mental tests that were recorded onto CD and played to the children at the end of the school day while they were still at their desks.

It instructed the children to do tasks such as adding up numbers; recalling numbers in reverse order; judging whether statements were true or false and remembering the last word in a sentence, and putting a series of items in order of their size eg pencil, table, whale.

PhD student Liam Hill, who ran the study, said:  “Our study showed that physical exercise benefits cognitive performance within the classroom and the degree of benefit depends on  circumstances.

“Most people have found that a brisk walk helps when sustained concentration is required. Children spend a lot of time sitting within a classroom so perhaps it is not surprising that they benefit from a burst of vigorous exercise.”

Vice-Convener of the Education, Culture and Sport Committee Councillor Martin Greig said: "The conclusion of the research confirms what many have long believed about the significance of physical activity for learning. The carefully conducted research gives support to incorporating an appropriate amount of exercise into the school day.

“There are clearly educational advantages in providing a varied and interesting learning environment that responds to the individual needs of pupils. Physical activity is an important element in promoting a positive and healthy learning experience, whether in the form of simple exercises, sport, dance or other more structured recreational choices."

How the study was conducted:

Two classes at each school spent two weeks taking part in the research.

Both classes did the mental tests during the last 15 minutes of each week day, writing their answers in special booklets which were later scored by an independent marker. There was a different mental test each day and these tests were repeated in the second week.

The physical exercises were carried out by the children behind their desks in the classroom around 30 minutes after lunch.

PhD student Liam Hill, who ran the study, said:  “The group who did the concentration tests after exercise in the second week performed significantly better.  When both groups had the benefit of familiarity with the tests, it was those who did the exercise who scored significantly higher than their non-exercising counterparts.”

All tests had in common the requirement for participants to memorise a short piece of information (e.g. sentences, object names, numbers) and then do something with that information in order to make a response (e.g. select only certain parts to be remembered, re-order it, use basic addition etc…).  Thus all the tests placed a high demand on children’s concentration.

The following tests were used:

Mondays (Paced Serial Addition): Children heard a sequence of twenty-one single digit numbers and were required to add pairs together (i.e. adding the first number to the second, second to the third), scoring one point for each correct addition. A first set had a 3 second gap between digits, the second set only 2 seconds and the third set only 1 second.  This made the test more challenging as it went on (i.e. less time to do the additions)

Tuesdays (Size-Ordering): Children listened to jumbled sequences of different sized objects and were required to recall them in size order.  As the test progressed the length of the sequences they were given increased by one each time; making the task increasingly challenging.

Wednesdays (Sentence-Span): Participants heard nine trivia statements of approximately equal sentence length.  They scored the statements as true or false as they went along.  Also, after hearing all the statements, they needed to try and recall the last word in each of the statements.  Two points scored for every correctly recalled word (the trivia responses served only as a distracter).

Thursdays (Digit-Span Backwards): Children listened to sequences of verbally presented numbers (from 1 to 9) and were required to recall them in reverse order. As the test progressed the length of the sequences they were given increased by one each time; making the task increasingly challenging.

Fridays (Visual Coding): Children were required to write the corresponding abstract symbols (e.g. ↑,  etc) under a sequence of numbers, according to a provided legend within two minutes (one point scored for each correctly correlated symbol).