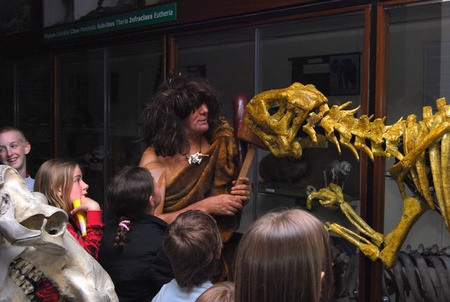 What really goes bump after hours and after dark behind the closed doors of a museum?

Visitors to the University of Aberdeen’s Zoology Building this weekend will have the chance to find out, as the institution’s popular Night at the Museum event returns for the third year.

A jam-packed evening of hands-on workshops, crafts, trails and tours will take place in the building’s Natural History Centre and Zoology Museum between 6pm – 10pm on Saturday (April 10).

The free event – which takes its name from the famous Hollywood blockbuster – is part of the University’s celebration of the International Year of Biodiversity.

Discovering more about some of the rarest, endangered species of animals on our planet will be a key focus of the event.

A slithery selection of exotic creatures - including Rio, the large South American lizard, a giant African land snail and a python – will be on show courtesy of science educator and presenter Mr Bug, who will conduct live handling sessions throughout the evening.

A giant angler fish – going by the name of Stinger the Macduff Monster - will visit for the evening from his home at the Macduff Marine Aquarium.

From the tiger to the loggerhead turtle, visitors will be invited to take a tour of exploration through the Zoology Museum and discovery more about animals which are under threat of endangerment across the globe.

A dinosaur and a caveman will be amongst the characters visitors can expect to meet, thanks to performances by Aberdeen Street Entertainers.

Visitors will also have the chance to relive the movie antics of security guard Larry Daley, his crazy inventions, and mayhem-causing museum exhibit friends, as a screening of Night at the Museum II will be held in the Zoology lecture theatre.

Marie Fish Education Officer at the University's Natural History Centre, and co-ordinator of the event said: “Year on year Night at the Museum has attracted around 700 visitors for a unique after hours experience behind the closed doors of the Zoology Building.

“This year’s event again promises to offer something for everyone, with an incredible array of intriguing characters for visitors to meet – from dinosaurs and reptiles to giant snails and fish.

“Tours, trails, and hands-on workshops will all be available, with the focus for the event falling on biodiversity – in the form of our planet’s endangered species.

“It promises to be an exciting evening of captivating science for all the family.”

Night at the Museum takes place on Saturday (April 10) in the Zoology Building, Tillydrone Avenue, Aberdeen from 6 – 10pm.

The event is free and pre-registration is not required.  Free parking is available on-site.