Microbes in our gut explored in new exhibition
06 April 2010 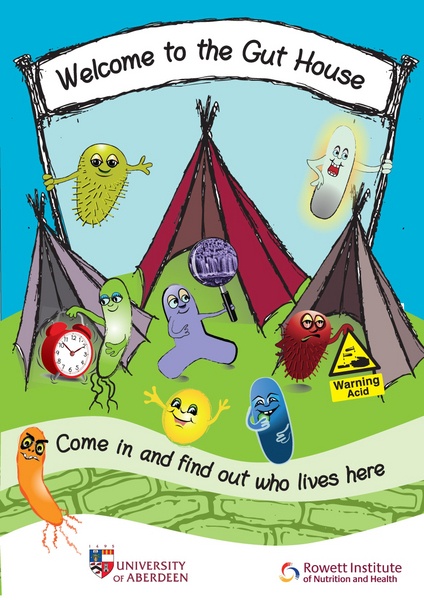 Hundreds of millions of them live inside us everyday, playing a major role in maintaining our health and preventing disease.

Now the microbes in our gut are the subject of a new interactive exhibition which invites visitors to take a journey through the body to discover how they benefit us.

Developed by the University of Aberdeen Rowett Institute of Nutrition and Health to celebrate the International Year of Biodiversity, The Gut House exhibition aims to explain the biodiversity which exists in our bodies - in the form of gut microbes - and the impact they have on our digestive system.

It will officially launch to the public at the Edinburgh International Science Festival today (Wednesday April 7), before appearing in Aberdeen later this year.

Tepees and toilet seats are used in the exhibition to depict the stomach, small intestine and the large intestine – allowing visitors to literally get inside and explore the three main areas of the body where gut microbes can be found.

How our digestive system differs to that of ruminant animals is also illustrated through two seaside cuts-outs depicting the inner workings of a human gut and a cow gut.

“Our gut health scientists have worked very closely with our design team to produce the highly original and engaging exhibition which invites visitors to take a journey through the body to explore the voyage taken by our food.  We look forward to seeing the reaction of the first visitors to the exhibition when it launches in Edinburgh today.”

Professor Harry Flint, head of gut health research at the University of Aberdeen Rowett Institute of Nutrition and Health said: “Gut disorders are a significant cost to the NHS and a major cause of ill health and poor quality of life in the Scottish population – so developing new research and understanding in this area is crucial.

“The role that gut microbes play in breaking down the food we eat can be both good and bad for us.

“Bacteria in the colon are able to break fibre down and produce a variety of substances – for example butyrate which is important for maintaining a healthy gut and thought to help protect the body against colon cancer.

“But gut bacteria can also break protein down into compounds which are which are known to cause cancer.

“Gut microbes also play major role in health and disease through interactions with the immune system.

“The research we are conducting is aiming to provide better dietary advice for a healthy lifestyle and to prevent disease, and there is also potential to develop new foods and therapeutics to target gut disorders.

“We hope that this exhibition - through its array of different activities - will give visitors some insights into the fascinating biodiversity hidden from view inside our bodies and its important function.”

The Gut House exhibition is open from today (Wednesday April 7) to Friday (April 9) from 10am – 5pm in the John Hope Gateway in the Royal Botanic Garden, Edinburgh as part of the Edinburgh International Science Festival.

People living in the north-east will get the chance to experience the exhibition when it appears as part of the annual TechFest festival in September this year.

The Edinburgh International Science Festival presents over 200 events in 35 venues across the city from 3rd to 17th April 2010.  With exhibitions, workshops, activities, experiments, performances and movies, there is something for everyone from toddler to teenager, 8 year old to octogenarian.  Highlights for 2010 include Spirit of the Wild, an exhibition of 60 stunning giant wildlife images in St Andrew Square, the BBC’s Bang Goes the Theory Roadshow and appearances from Brian Cox, Richard Dawkins, Richard Wiseman and Sir Alec Jeffreys in the Big Ideas strand of debate and discussion.  For full details of the programme, and to book tickets, visit www.sciencefestival.co.uk or call 0131 553 0322.