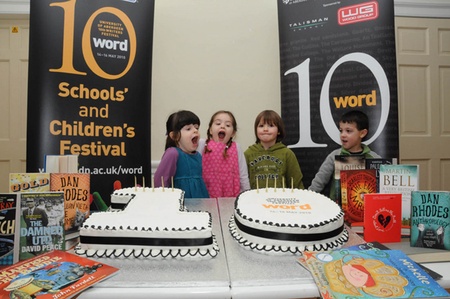 Word – the University of Aberdeen Writers Festival - will celebrate its 10th birthday with its most diverse programme ever ranging from leading literary lights to top names from the worlds of wildlife, politics, science and opera.

David Peace makes his first visit to the Festival after his success last year with the film adaptation of The Damned United and the powerful TV dramatisation of his Red Riding quartet, as does ‘the thinking reader’s thriller writer’ Philip Kerr.

Scarlett Thomas, the best selling author of The End of Mr Y will also make her Word debut while novelists Zoe Strachan and Louise Welsh will team up for a special event.

In an exciting new development, Word will host the world premiere of Scottish Opera’s successful Five:15 strand for 2010 – five mini-operas, including two written by the University of Aberdeen’s own academics.

The Festival, which will run from May 14-16, will also feature one-woman shows with the inimitable Karen Dunbar, of Chewin’ the Fat fame,  performing a reading of Denise Mina's A drunk woman looks at the thistle - a monologue that Denise wrote especially for Karen to perform, and the renowned West End actress Linda Marlowe in The World’s Wife based on the poem sequence by Carol Ann Duffy.

For those with an interest in science, journalist and libel law campaigner Simon Singh and Jeff Forshaw, co-author of the groundbreaking E=mc2, will feature

Word 10 also has a special line-up dedicated to Scots and Gaelic culture, including a tribute to north-east storyteller Stanley Robertson, as well as a series of readings and talks celebrating Scotland’s greatest living poet Edwin Morgan and events with writer Janice Galloway, and singer Anne Lorne Gillies.

Word, sponsored by Talisman Energy (UK) Limited and Wood Group, is expected to attract more than 10,000 visitors to the Granite City.

It is a far cry from the Festival’s humble beginnings – with a grant of just £1,000 it was created with the aim of bringing Scottish writers to Aberdeen to give readings.

The 2010 Festival features more than 50 events in the main festival alone with dozens more laid on for young visitors.

To mark its milestone birthday, the Festival will kick-off with a reprisal of the very first Word event featuring great prose from Ireland and Scotland with Bernard MacLaverty, William McIlvanney, and Word artistic director Alan Spence.

Alan Spence, who will also launch his new collection of poetry illustrated by leading Scottish artist Elizabeth Blackadder at the Festival, said: "This is an exceptional year for Word with our broadest and most varied programme to celebrate the 10th festival.

“We are delighted that opera will feature for the very first time and it is a real coup to be able to host the world premier of Scottish Opera’s  Five:15 series.

“Word is now truly international in scope, featuring voices from America, Ireland, Spain, and even Guatemala while retaining important cultural links to Scotland and the north-east.

“With another packed programme for the Marathon Oil Schools' and Children's Festival, there really will be something for everyone at Word 10.”

Talisman Energy UK Vice President, John Forrest, said: “Word creates a wonderful atmosphere around not just the University campus but all across the city.

“This year’s exciting line-up of guest authors and writers is of the quality we have come to expect from Alan Spence and his team, and Talisman is delighted to again be part of this celebration of the written and spoken word as the festival celebrates its 10th birthday.”

Allister Langlands, Chief Executive of Wood Group added: “Wood Group is delighted to be joining Talisman in supporting the Word Festival during what promises to be an exciting 10th birthday celebration.”

Professor Chris Gane, Head of the College of Arts and Social Sciences, University of Aberdeen, said: “We are proud that the Word Festival is now firmly established as one of Scotland's most vibrant and popular literary events.

“Word continues to make a unique and important contribution to the cultural landscape of the region and is a cornerstone of the University of Aberdeen’s public events programme.

“We are delighted that it has continued to grow and develop and we hope that the diverse programme for the 10th Festival will connect more people than ever with inspirational writers, performers and musicians.”