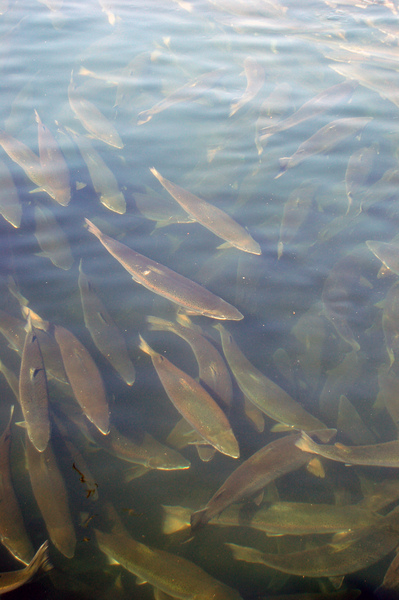 Large fish farms may not have a bigger environmental impact on the seabed than their smaller counterparts, according to a University of Aberdeen study.

Researchers examined how the size of a fish farm relates to the size of its ‘environmental footprint’. They analysed data from 50 Scottish fish farms and found that larger fish farms do not necessarily have a greater effect on the sea floor than smaller fish farms.

Fish farms generate organic wastes in the form of uneaten food and fish faeces. These sink to the seabed and can have detrimental effects on the organisms that live there if they are allowed to accumulate.

Bigger fish farms hold more fish and can be more economical to run. Recent years have seen the consolidation of many smaller farms into fewer, larger and more competitive operations that can produce fish more cheaply.

Scottish fish farmers are required annually to monitor the sediments beneath and adjacent to their farms and report back to the Scottish Environment Protection Agency (SEPA).

Lead researcher, Dr Daniel Mayor from the University of Aberdeen’s Oceanlab, said: “The environmental monitoring data collated by SEPA is an invaluable resource – it has allowed us to examine the effects of fish farming at far more sites than we would ever have been able to visit ourselves.

“Increasing the quantity of fish at a particular location requires more feed and generates more wastes, so bigger farms might be expected to have a greater environmental impact. We have shown that this is not necessarily the case because other factors, such as where the farm is situated, are also important.”

Their study found that impacts of Scottish fish farms consistently decrease with increasing distance from a farm, irrespective of their size.

The effects of other factors - such as the speed of the seawater current, water depth and farm size - on the quantities of fish farm wastes reaching the seabed are less clear-cut.

Dr Mayor added: “Our study joins the growing body of evidence that suggests that the environmental impact of a fish farm cannot be predicted by its size alone.

“The quantities of wastes generated at a particular site, and their subsequent fate in the environment, are affected by a diverse range of interacting processes that we don’t yet fully understand.”

The team’s findings have important implications for the design and implementation of future fish farms in Scotland.

Dr Martin Solan, co-author of the research, said: “It is clear that fish farming provides one solution to the increasing global demand for food, but the real challenge is how to feed the world with fish without destroying our coastal environment.

“Our findings provide reassurance that Scotland’s fish farming industry has found a way to achieve expansion in a responsible manner, I have no doubt that other countries around the world will follow Scotland’s lead.”

All Scottish fish farms are licensed and regulated by the Scottish Environment Protection Agency (SEPA). Their stringent environmental quality standards ensure that the impacts of fish farming are minimised and are recognised as a global benchmark.

The quantity of fish permitted on a contemporary Scottish fish farm is determined using sophisticated mathematical modelling techniques to predict the maximum tonnage of fish that a particular location can sustainably support without breaching strict environmental quality criteria.

Fish farming injects millions of pounds into the Scottish economy each year, providing thousands of jobs in rural areas.

Global aquaculture efforts must double by 2050 if our current appetite for fish and seafood is to be sustained, according to the Food and Agriculture Organization (FAO).

Their research was funded by the Scottish Aquaculture Research Forum, a registered charity and an independent company whose main aim is to support research into aquaculture and related areas.

The team’s findings are published in the scientific journal Environmental Science and Technology.