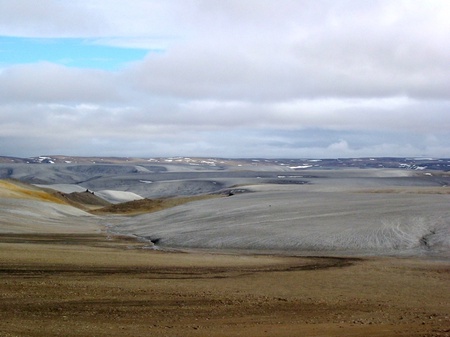 Primitive life on Earth could have survived heavy pummelling by large meteorites over four billion years ago, according to new findings by Scottish scientists.

Simple organisms could have evaded meteorite bombardment by living underground and reinvading surface rock whilst it was still hot – research has revealed.

Scientists had believed that life on Earth could not have survived, and that several cycles of evolution might have taken place before simple organisms finally took a permanent hold.

But studies of a type of ancient microbe – thought to be amongst the earliest to inhabit Earth – have revealed for the first time that primitive life could in fact have endured the period known as the ‘heavy bombardment’.

Experts from the University of Aberdeen and the Scottish Universities Environmental Research Centre collected and analysed mineral samples from the Haughton Crater on Devon Island, an uninhabited island in the Canadian High Arctic.

Investigations showed minerals in the crater had been deposited by a type of microbe which likes heat, and is capable of withstanding temperatures close to boiling point.

The microbes had colonised the entirety of the crater - over 20km across and at least 200 metres below the Earth’s surface – indicating that they would have been able to live deep underground in the darkness known as the ‘deep biosphere’.

Professor in Geology at the University of Aberdeen, John Parnell led the study with Dr Adrian Boyce from the Scottish Universities Environmental Research Centre, East Kilbride.

Professor Parnell said: “”When the Earth was young, over four billion years ago, it was repeatedly hit by large meteorites which would have shocked and melted the planet’s surface.

“Up until now scientists have imagined that primitive life would not have been able to withstand this pummelling.

“But our analysis of the mineral told us that this ancient microbe could have been able to survive meteorite bombardment through a combination of living underground and reinvading the surface rock while it was still very hot.

“Our findings add to a growing body of evidence that there is much life on our planet that lives deep below out of sight and that this is where early life on Earth may have started.

“Similar meteorite craters with similar minerals occur on Mars, and this work highlights an approach that could help us look for evidence of life there.”

The research was undertaken with support from the Canadian Space Agency, NASA, Haughton Mars Project and the Natural Environment Research Council.

It is published in this month’s Geology – the leading international publication from the Geological Society of America.