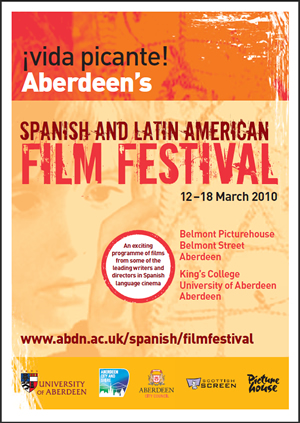 Aberdeen’s injection of Latin colour and culture will return from March 12 with the second Spanish & Latin American Film Festival.

After a hugely successful first run in 2009, the festival will again take place at The Belmont Picturehouse from March 12-18 with an extended set of screenings.

Films such as Victor Erice’s beautiful Spirit of the Beehive, the quirky award-winning Uruguayan film Whisky, and the recently released I’m Gonna Explode, produced by Mexican cinema duo Gael García Bernal and Diego Luna, will be shown as part of the week-long event.

Building on its first year, the festival aims to link up with other similar cultural events taking place in the city with events to appeal to both locals and the growing community of native Spanish and Latin Americans drawn to live, work and study in the north-east.

A partnership between the University of Aberdeen and The Belmont, with support from Aberdeen City Council and Scottish Screen, the aim of the festival is to promote the city as one of the UK’s leading Hispanic cultural centres.

Organiser Dr Nerea Arruti of the University of Aberdeen said: “Based on the success of 2009, the intention is that this will now be an annual event in the city calendar, and can grow into a celebration of Hispanic culture in various forms through links with other initiatives in the region.

“Most films were near sell outs in 2009, and we expect the same this year”

All screenings are open to the public. Full details can be obtained be visiting www.abdn.ac.uk/spanish/filmfestival/ with tickets available through the Belmont Picturehouse http://www.picturehouses.co.uk/ or telephone 01224 34 35 34.

The films being screened at the festival are: