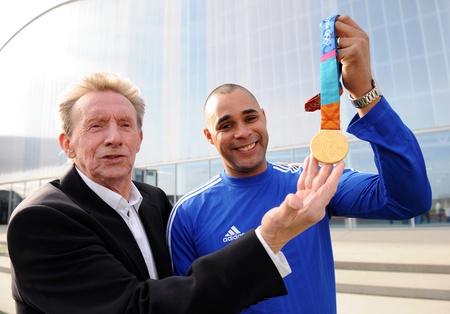 Shona Robison, Minister for Public Health and Sport, and the Lord Provost of Aberdeen Peter Stephen will also visit the £28million Aberdeen Sports Village (ASV), which has raised the bar when it comes to sports provision in the north-east of Scotland, catering for needs of elite athletes and community groups alike.

ASV is a joint venture between the University of Aberdeen, Aberdeen City Council and the Scottish Government through its expert advisers on sport, sportscotland. It opened its doors to the public in August and boasts an unrivalled standard of facilities outwith the central belt – all housed under one roof.

Aberdonian Law will unveil a plaque to commemorate the official opening of Aberdeen Sports Village, which has already proved a hit with users from the Granite City and beyond.

The former striker, who is the only Scottish player in history to have won the prestigious European Footballer of the Year award,will also meet children from his former schools Kittybrewster Primary and St Machar Academy (formerly Powis Academy).

Pupils will have an opportunity to try out the full-size FIFA-approved pitch - one of the first of its kind in the UK – in a coaching session which Law will watch.

Gardener, who won Olympic gold for the 4x100m relay at the 2004 Athens games and is part of only a select group of athletes to have broken the 10 second barrier for the 100m, will pass on his own expertise to children in the athletics area.

Since it opened its doors more than 200,000 people have made use of the facilities, which also include a large sports hall, four squash courts, fitness suite and performance gym, exercise studios, a crèche and café.

The Sports Village has attracted users of all ages and from all sectors of the community, with 5,000 returning on a daily basis and popular groups such as the Evergreens club for over 60s now well established.

Membership numbers stand at 5,000 and in the recent big-freeze, football clubs - including Aberdeen and Peterhead - and rugby clubs, like Aberdeen Grammar and Ellon, flocked to make use of the superb indoor facilities when the weather put paid to outdoor training.

They were also utilised by Aberdeen boxer Lee McAllister ahead of the defence of his Commonwealth lightweight title fight against Samuel Amaoko, which he took on points.

Work is also progressing between the partners on plans to construct a 50m pool to further enhance facilities at Aberdeen Sports Village.

Law and Gardener will address an audience of around 200 invited guests and Law will conduct the official opening before they attend their respective skills sessions.

The Lord Provost of Aberdeen Peter Stephen and Shona Robison, Minister for Public Health and Sport will also make speeches.

Shona Robison said: “Aberdeen has a long history of producing some of Scotland’s outstanding athletes and top quality sports performances and the opening of this world class facility can only help to inspire future generations to get involved in sport and try a range of different activities.

“The Scottish Government’s and sportscotland’s investment into this new venue demonstrates our commitment to work with partners to secure a network of quality sports facilities across Scotland – which will help us achieve our twin ambitions of increasing participation and improving performance.

“Encouraging our communities to participate in sport and physical activity is the main aim of our Active Nation legacy campaign. This alongside the provision of excellent facilities supported by a sustainable workforce of coaches and volunteers will ensure Scotland becomes a modern, healthy and inclusive society, providing benefits that are visible and enjoyed by all.”

“This local sports facility has been designed to international standards, with the London 2012 Olympic Games and the Glasgow 2014 Commonwealth Games in mind, and is already benefitting aspiring athletes and the wider community alike.

“We have been delighted by the response to the Sports Village - all aspects of the facility are well used and we have had great feedback from users.

“Aberdeen Sports Village is working to bring other users to the facilities and in addition work is progressing with partners on the design of a 50 metre pool which will complement the facilities already provided on site.”

Denis Law added: “I’m very pleased to be invited to open Aberdeen Sports Village. It’s a facility that will encourage sporting development across all age groups and I only wish that I’d had the benefit of such fantastic sporting facilities on my doorstep during my childhood days in Aberdeen.

“I would encourage people of all ages, sports and skill levels to use this tremendous facility and congratulate all involved in bringing this to Aberdeen”

The Lord Provost of Aberdeen Peter Stephen said: "Aberdeen Sports Village is phenomenal. It offers equality of opportunity for all in the community to enjoy first class sports and leisure facilities.

"Whether it's training facilities for elite athletes or sport activities for local residents and visitors to the city the provision is second to none."

Louise Martin, Chair of sportscotland, said: “Aberdeen Sports Village has an important role to play in meeting sportscotland’s aims of increasing participation and improving performance which is why we were delighted to invest Scottish Government and National Lottery money in this ambitious project.

“Working closely with the project partners, sportscotland provided advice on creating a facility designed to meet the needs of both athletes and the local community.  The results are outstanding, providing more and better opportunities for the people of Aberdeen and the North East to participate in sport and realise their full potential.

Professor Stephen Logan, Senior Vice-Principal, University of Aberdeen, said: "The international standard of facilities housed within the Aberdeen Sports Village reflects the University of Aberdeen's ambition to become an institution which can compete with the best universities in the world.

"The facilities are of great benefit to all students with an interest in sport and health and will help to promote the development of elite athletes, whom we will now be able to attract from all over the world."