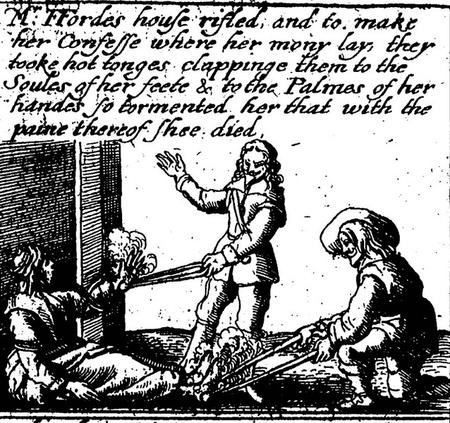 A major research project has been launched, which could shed new light on one of the most violent moments in Irish history by marrying the investigation of eyewitness reports with the latest research technology.

Researchers from the University of Aberdeen have been awarded almost £334,000 under the Arts and Humanities Research Council (AHRC) Digital Equipment and Digital Enhancement for Impact scheme, to help devise new techniques to analyse a rare manuscript collection held by Trinity College Dublin.

The 1641 Depositions are witness testimonies, mainly by Protestants but also by some Catholics, describing their experience of the 1641 Rebellion – one of the most violent chapters of Irish history.

The testimonies document the loss of goods, military activity, and alleged atrocities committed by the Irish insurgents, including assault, stripping, imprisonment and murder.

An earlier £1 million project involving collaboration between Trinity College Dublin and the universities of Aberdeen and Cambridge led to the recent digitisation of the archive.

Now linguists from Aberdeen have been given further AHRC funding which will allow them to interrogate the database for a variety of information including the development of the English language in Ireland and the settlers’ lifestyle there in the 1640s, the language of atrocity appearing in the witness testimony and the reliability of the evidence in the depositions.

As a major focus of the overall project, the findings of the Aberdeen-led study could contribute to new ways of presenting historical information with the aid of available technology, such as the synthesisation of the voices behind the testimonies and visualisation of the events that occurred.

The archive contains more than 19,000 pages in 31 volumes. Of these, 11 volumes contain depositions relating to Leinster, 10 to Munster (seven of these cover County Cork), two to Connacht and eight to Ulster.

Researchers will work closely with IBM in Dublin, one of the world’s leading technology companies, and use its LanguageWare© technology to analyse the depositions and to cross-correlate an array of features of the text – a process which would be too complicated and potentially take a lifetime for a scholar to undertake manually.

Dr Barbara Fennell, Senior Lecturer in Language and Linguistics at the University of Aberdeen, who will lead the project, said: “This body of material is unparalleled anywhere in early modern Europe, and provides a unique source of information on the 1641 rebellion.

“It has now been digitised but we have only scratched the surface in terms of the wealth of information that can be extracted from the depositions.

“This project will greatly enhance our understanding not only of the events surrounding the 1641 rebellion – a key moment in Irish history – but also the social, economic, cultural and political situation in 17th century Ireland.”

Researchers will use the manuscripts to investigate language variation and change in Ireland during the period and the development of Irish-English dialects.

Dr Fennell added: “As linguists we are interested in the language of violence and atrocity. This will give us insights into the definition of atrocity and link with many other organisations investigating violence and genocide.

“By using the software to analyse the text, we should be able help historians understand who was associated with which violent acts in which areas, and with our linguists’ eyes, we should be able to find clues as to whether the witness statements were genuine or perhaps exaggerated by specific court reporters in the service of Oliver Cromwell.

It is important to remember that these depositions are mediated by the commissioner who wrote them down so there is inevitably manipulation of the descriptions.

“We hope to reach a stage where we can attribute certain formulations to certain commissioners in certain areas and conclusions can then be drawn from this new information.”

Researchers from the University of Aberdeen will work with the Department of History and the Centre for Next Generation Localisation at Trinity College Dublin, the Digital Humanities Observatory, Dublin and the IBM LanguageWare© Group, Dublin to gather and evaluate their findings.

Jane Ohlmeyer, one of the PIs for the 1641 Depositions Project and Erasmus Smith’s Professor of Modern History, Trinity College Dublin, said: “We are delighted that the AHRC has funded this exciting project which will allow for innovative linguistic analysis of the 1641 Depositions.

“This represents an important ‘next step’ in the project and will allow Dr Fennell and her team to work with the historians and computer scientists based in Trinity and with technology experts from IBM Ireland to interrogate the Depositions in ways hitherto unimaginable.  We see this as the beginning of a very fruitful collaboration.”

The Full Economic Cost of the project is £418,000 made up of the AHRC contribution of £333,574  and funds from the University of Aberdeen.

Arts & Humanities Research Council: Each year the AHRC provides approximately £102 million from the Government to support research and postgraduate study in the arts and humanities, from languages and law, archaeology and English literature to design and creative and performing arts. In any one year, the AHRC makes approximately 700 research awards and around 1,350 postgraduate awards. Awards are made after a rigorous peer review process, to ensure that only applications of the highest quality are funded. The quality and range of research supported by this investment of public funds not only provides social and cultural benefits but also contributes to the economic success of the UK.

In 1741 the 1641 Depositions were gifted by Bishop John Sterne to the Library of Trinity College Dublin. In all about 5,000 depositions or witness statements, examinations and associated materials, amounting to 19,010 pages and bound in 31 volumes, are extant in the Manuscripts and Archives Research Library of Trinity College Dublin.  They are difficult to read (some are virtually illegible), the spelling is inconsistent and erratic, as is the use of grammar and punctuation and there is a wide variety of handwriting.  Eleven volumes contain depositions relating to Leinster, ten to Munster (seven of these cover County Cork), two to Connacht and eight to Ulster

Why are the Depositions important?
The depositions relating to Ulster, where the rebellion first began, are of particular importance and form a key element of our historical heritage.  During the early decades of the 17th century English and Scottish protestant planters (who increasingly identified themselves as ‘British’) colonised the province, often dispossessing the Irish-speaking native Catholic population.  The depositions vividly document these colonial and ‘civilizing’ processes, which included the spread of Protestantism and the introduction of lowland agricultural and commercial practices to a primarily pastoral area, together with the native responses to them.