Farmers should be paid to protect our hills, say experts
26 February 2010 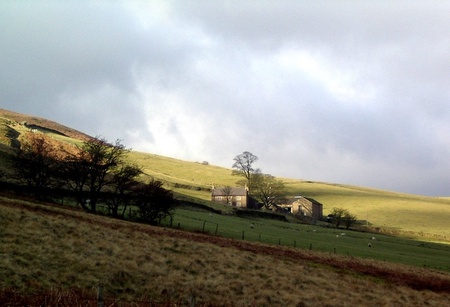 The UK uplands play a huge part in our daily lives, but their future is under threat.

The uplands, which include parts of the Pennines, the Cumbrian fells and much of Scotland, are the source of 70% of the nation’s drinking water and are the single largest carbon reserve in the UK.

They also play a key role in food production, flood management and tourism.

Now a team of experts led by the Universities of Aberdeen and Leeds is calling on the government to pay farmers to manage these areas in a way that will protect them for future generations.

Mounting pressures such as climate change and a growing population are likely to have a huge impact on the uplands in the coming years and the way they are managed needs to change to adapt to these pressures.

New recommendations from the Sustainable Uplands project would see farmers rewarded financially for producing things like clean water and carbon storage, in addition to food.

Professor Joseph Holden of the University of Leeds, co-leader of the Sustainable Uplands project, said: “The uplands are not just barren patches of wilderness, they are highly-managed landscapes that many people in the UK depend on for their livelihoods.

“Most current payments to upland farmers are based on the area of land they hold rather than what they’re using it for. But society needs people managing the hills to protect water supplies and unique wildlife, and to keep carbon locked in peat soils.”

The researchers used computer models to show what effect different types of land management would have on the landscape. They found that some types of land use may produce certain benefits at the expense of others. For example, practices designed to produce more food or store carbon might compromise clean water supplies or biodiversity.

Dr Mark Reed from the University of Aberdeen, co-leader of the project, said: “This isn’t about new funding – it’s about using existing money more effectively. We’re currently talking to the policy community and land owners and managers about how we could use current funding to produce a much wider range of goods and services from the countryside.

“This may involve paying bonuses to people who join together to do things at a landscape scale, for example to reduce flood risk or create new wildlife habitats.”

The recommendations appear in a Policy and Practice Note entitled, Sustainable uplands: re-shaping land use policy for our hills.

This was published ahead of the Commission for Rural Communities Inquiry into the future for England’s upland communities, the findings of which are expected to be announced in the near future.

A copy of the policy recommendations, entitled, ‘Sustainable uplands: re-shaping land use policy for our hills,’ can be downloaded here: http://www.relu.ac.uk/news/policy%20and%20practice%20notes/Reed%20Hubacek/PPN14.pdf

The Sustainable Uplands project is a collaborative, interdisciplinary research project involving the Universities of Aberdeen, Leeds, Durham, Sheffield and Sussex together with Moors for the Future partnership and Heather Trust. It was funded by the Rural Economy & Land Use Programme (RELU) and has now received additional follow-on funding from the Economic and Social Research Council (ESRC). The project has study sites in the Peak District National Park, Yorkshire Dales and Galloway, Scotland. http://homepages.see.leeds.ac.uk/~lecmsr/sustainableuplands/index.htm

The purpose of the project is to consider how our uplands might change under future social, economic and environmental conditions and identify a range of innovative and practical solutions to help people cope with and harness these changes and has identified ways policy-makers can support adaptation in Britain’s hills.