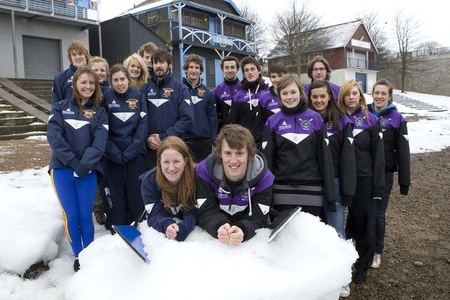 Will Robert Gordon University’s athletes hold onto the title this year? Or will rivals the University of Aberdeen - who have claimed the trophy an astonishing 12 times in the 15 year history - scoop the honours once again?

Only time will tell as the countdown to this weekend’s ‘Battle of the Blades’ – the 15th Aberdeen Asset Management Universities’ Boat Race - begins.

A legion of fans including Aberdeen’s Lord Provost are expected to line the banks of the River Dee on Sunday (February 28) to cheer on the teams as they battle it out for the coveted title by racing 3.5km from the Bridge of Dee to Aberdeen Boat Club in Torry.

The event, which is sponsored by Aberdeen Asset Management, is Scotland’s longest-running rowing race and features the universities’ finest rowing athletes.

The exciting build up to the big race starts at 11.55am with a 2nd Crew boat race, an Alumni boat race, before local media celebrities add to the day’s entertainment by racing against each other in the Media Challenge Cup.

The challenge will feature teams from the Evening Express, The Press and Journal and STV who will race in coxed ‘tub’ pairs over 300m of the River Dee.

Aberdeen Asset Management is an independently-operated company which has been listed on the London Stock Exchange since 1991 and is currently a FTSE-250 (mid-cap) company with a market capitalisation of £1.3 billion. The group presently employs more than 1,800 people worldwide.

Excluding its smaller private equity offices in the UK, the group has 31 offices located in 24 countries around the globe with its main investment management centres in Edinburgh, London, Philadelphia, Singapore and Sydney, and its property operation is headquartered in Stockholm.

Aberdeen Boat Club (ABC) is one of the oldest rowing clubs in the UK. Founded in 1865 on the River Dee, ABC is now one of Scotland’s largest rowing centres. Competitively, members have enjoyed success at both national and international levels as well as generally having the strongest presence at domestic events. In 2002, Aberdeen Boat Club became the first Scottish club to win at Henley Royal Regatta.

The club welcomes rowers in the Aberdeen area with a well-organised training structure for complete beginners.