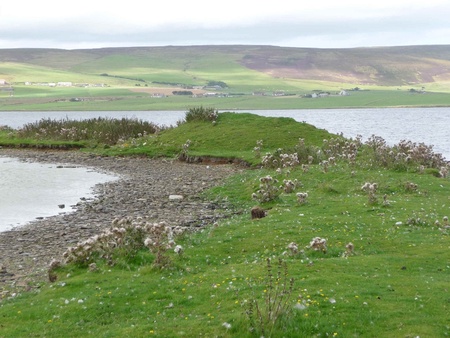 Researchers, who discovered the first submerged stone remains of their kind in the UK, have been awarded additional funding to continue their search off Orkney.

Experts from the Universities of Aberdeen, Dundee, St Andrews and Lampeter uncovered structures including stone tables and walling, and what they believe is a graveyard, near the island of Damsay late last year.

The findings – some of which could date back thousands of years - are providing new insights into the UK’s archaeological history.

They are also helping further understanding of how people dealt with climate change in the past.

Now new funding from the Russell Trust and Historic Scotland will allow a fresh round of dives and remote sensing work to begin next month.

University of Aberdeen archaeologist Caroline Wickham-Jones, one of the scientists leading the investigation said: “Orkney is known for its rich archaeology but the remains which we see on land only tell us half the story.

“When people began to inhabit the island over 10,000 years ago the sea would have been up to 40 metres lower than it is now.  This means that there is a vast potential for submerged archaeology to exist on the seabed around Orkney – and the findings we made last year only scratch the surface of what could be there.

“The new funding will allow us to undertake dives to discover new sites for investigation and further examine sites we have already identified.

“It will also allow us to continue to examine the rate of sea level change which Orkney has experienced since the Ice Age for clues as to what this can tell us about how people may have adapted to climate change in the past.”

One particular focus for the new investigation will be the seabed just offshore from the remains of St Mary’s Chapel on Damsay.

All that remains of the Chapel is a mound which is currently being eroded by the sea.

But records suggest that a much larger complex once existed around the building, which dates back to the twelfth century and became a focus for pilgrimages.

Ms Wickham-Jones said: “We have found some intriguing stone remains on the seabed besides the remains of St Mary’s Chapel including walling, a massive tabular structure and a number of small upright sandstone slabs that look just like gravestones.

“The area of seabed next to the Chapel is somewhere we will be looking for further remains.  It’s crucial that we work to identify and carefully examine what can be found on sites such as this whilst the remains are preserved and sea levels make our investigations accessible.”

The Rising Tide project brings together archaeologists, geophysists and coastal geomorphologists to investigate the submerged landscape of Orkney.

The project began in 2006.  Previous work has shown that sea level around Orkney only reached its present height about 2000 BC.  This is long after people first settled in the islands, and about a thousand years after work began building the great stone circles of the Ring of Brodgar and the Stones of Stenness.  Orkney was originally one large island and its inhabitants have had to learn to cope with rising sea levels through much of their history.  Many traces of this early settlement may now lie on the sea bed.  The work of the project to date has been funded by Historic Scotland, The Crown Estate, The Carnegie Trust, NGS/Waitt Grant, and Orkney Islands Council.