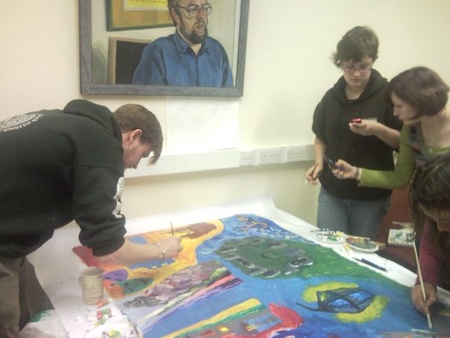 Students from the University of Aberdeen helped celebrate the unveiling of new Gaelic artwork at the city’s railway station on Saturday (February 20).

The artwork features pictures of places of importance to Scotland and Aberdeen, and these images are paired with Gaelic words and phrases.

They are the brainchild of the Gaelic Arts Project, funded by Bòrd na Gàidhlig, through the Taic Freumhan Coimhearsnachd fund.

The coordinating team for the project includes three University of Aberdeen students – Celtic PhD candidates Lindsay Milligan and Ashley Powell, and Paula Sledzinska an undergraduate from the School of Language and Literature.

Paula, who was heavily involved in managing the project, said: “The murals will help to draw attention to the presence and use of Gaelic in the urban setting, and the long tradition of Gaelic education in Aberdeen.

“We hope they will be enjoyed by travellers at the railway station and they certainly brighten up the new waiting room and travel centre.”

A special celebration featuring Aberdeen Gaelic Choir was held at the station on Saturday to mark the unveiling of the artwork.