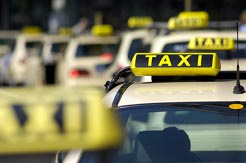 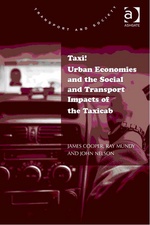 Black in London, yellow in New York, and a saviour in the early hours of the morning - the taxicab is a common sight and convenient for city dwellers across the globe.

Now an Aberdeen academic has penned one of the first books to explore the origins of this mode of transport and how its use may change in the future.

Professor John Nelson, Director of the University of Aberdeen’s Centre for Transport Research investigates how taxis could become a more environmentally friendly and cost effective choice in Taxi! Urban Economies and the Social and Transport Impacts of the Taxicab, which is published today (Tuesday February 23).

Professor Nelson suggests taxis have the potential to be used as a shared transport option in the future in the UK – as they are in other European counties and North America.

But says this would require a change in the British psyche.

Professor Nelson – who co-wrote the book with academics from Edinburgh Napier University and the University of Missouri, St Louis – said: “Taxicabs have an important role to play in urban living providing a range of services across many different social groups.

“They are particularly crucial to a city’s nighttime economy when other modes of public transport are less available.

“In the UK taxicabs are still seen as a stand alone transport option, but in countries such as North America, Germany and Italy they are commonly used for shared journeys.

“This is achieved either through a specific travel company – for example you see group limousine hires available at airports in America - or by people who spontaneously organise to travel together according to their destination.

“Using taxis in this way makes them a more environmentally friendly and cost effective option, and although legislation and initiatives have been introduced in the UK to encourage shared use of taxis they have been largely unsuccessful to date in prompting a change in public attitude.

“This is mainly due to the British psyche - where traditionally people would not feel comfortable sharing a taxicab with a stranger and would not wish to approach someone they didn’t know to organise a shared journey.”

In his book Professor Nelson also examines Britain’s history of the taxicab, which can be traced back to the 17th century when it first appeared in horse and cart form.

Professor Nelson continues: “The first reference to the taxi in the UK was in London in 1654 when it was known as a Hackney Coachman – the word Hackney is from the French language literally meaning a horse pulling cart.

“The first petrol powered taxi came into use in 1903 and taxi metres were introduced four years later.

“Whilst the use and design of taxis has developed over the years many of the regulations which govern taxi use and safety standards have remained the same.

“For example taxis still need to meet the requirements of being able to make a complete U-turn within a 25ft turning radius – a regulation which has been in existence since 1906.”

The book is published by Ashgate and available now from http://www.ashgate.com/.