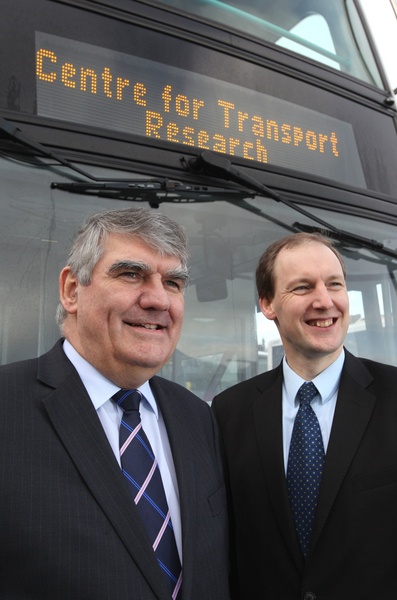 FirstGroup, the leading transport operator in the UK and North America, has extended its partnership with the University of Aberdeen’s Centre for Transport Research (CTR).

Formed in September 2007 and officially launched in April 2008, the CTR is the focus for transport research at the University of Aberdeen.

The Centre’s mission is to develop a leading research centre of international excellence and reputation in Aberdeen specialising in the sustainability of transport systems with emphasis on environment, society and technology.

Director of the Centre for Transport Research and Professor of Transport Studies, John Nelson, said: “We have enjoyed a terrific working relationship with First over the last two and a half years and I am thrilled that the company has agreed to extend the partnership to January 2013.  Its support has been invaluable in our success so far.”

Since its inception, the CTR can point to an impressive track record.  It played a pivotal role in securing a record breaking £12.4m contract for the University of Aberdeen to investigate how advances in digital technology can transform rural communities.

Its pioneering research is widely respected and influential.  Groundbreaking market segment analysis gives insight into car drivers’ motivations and highlights groups who might be persuaded to switch to bus and train.

The CTR has also been looking into the widespread benefits to the economy and the environment of dedicated home to school transport for children and young people and is also contributing to several European projects exploring different aspects of Intelligent Transport Systems.

Professor Nelson continued: “Transport is one of the crucial issues affecting the way we live and work today, not just in the UK, but worldwide.  Sustainable transport solutions are vital not only for the strength of the economy, but also for communities, and overlap with debates on energy, urban and rural planning, work-life balance and health.

“The CTR specialises in researching the sustainability of transport systems with a clear emphasis on environment, society and technology.  In the course of the next 12 months we will reveal some of our findings, including our studies into Aberdeen’s traffic problems, which we hope will a have a significant influence on the way we think about transport.”

Chief Executive of FirstGroup, Sir Moir Lockhead, is pleased with the University collaboration and said: "When we launched almost two and half years ago we challenged John and his team to develop a leading research centre of international excellence and reputation.  The CTR has exceeded our expectations – it is firmly established as a centre for creative, innovative transport thinking.

“We will continue to work closely with John and his team and develop some interesting and groundbreaking transport research, which I hope in the long term, will enable us to develop improved transport services for the travelling public.”

FirstGroup plc is the leading transport operator in the UK and North America with annualised revenues of over £6 billion a year. We employ more than 130,000 staff and transport some 2.5 billion passengers a year.

The Group is Britain’s largest bus operator running more than one in five of all local bus services. A fleet of nearly 8,500 buses carries approximately 3 million passengers a day in more than 40 major towns and cities. We also operate Greyhound UK providing regular services each way between London and Portsmouth and London and Southampton.

The Group operates one quarter of the UK passenger rail network, with a balanced portfolio of intercity, commuter and regional services, carrying over 280 million passengers per annum.

They provide rail freight services through First GBRf and operate the London Tramlink network on behalf of Transport for London carrying nearly 28 million passengers a year.

In mainland Europe we operate some 150 buses in south west Germany and, with our partner DSB, we operate the Øresund rail franchise which includes routes in and between Denmark and Sweden.