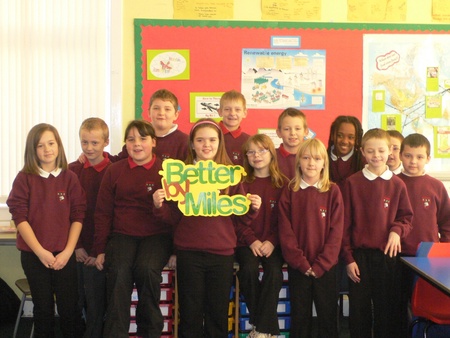 Ever wondered how far a banana has flown to make it from field to fruit bowl? Or the miles travelled by the green beans on your dinner plate?

Pupils from Aberdeen’s Muirfield Primary will tread the boards today (Thursday February 11) in a production exploring all aspects of the food miles debate.

The play is the culmination of a 6 month project which has seen the Primary 6 pupils become the first in Scotland to trial a new online teaching resource called Better by Miles.

Funded by Knowledge Scotland – a collaborative partnership between 6 of Scotland’s leading research organisations* – and supported by the Scottish Government, Better by Miles aims to teach pupils about sustainable food production through drama, discussion and dance.

The online tool guides a class through the process of producing a short play, set in a TV studio where chefs are being filmed preparing a meal.

From the scripts and music to costume and prop guides, all of the components required to create the production are available through the resource.

The pupils from Muirfield School have produced video diaries documenting their experience of trialling the project.

These diaries - along with photographs and film footage of today’s performance - will form part of the resource which is now available to schools throughout Scotland online at www.abdn.ac.uk/rowett/bbm .

Dr Sue Bird, Knowledge Exchange Manager for the University of Aberdeen Rowett Institute of Nutrition and Health – the main research institute involved in the development of the tool said: “The aim of Better by Miles is to provide an online resource which can be used by schools throughout Scotland to engage children’s thinking, and develop their understanding about sustainable food production.

“Developing knowledge of where our food comes from and how it gets to us is key part of learning about the environment around us, our heath and wellbeing.

“We have been working with pupils and teachers from Muirfield Primary for 6 months piloting the resource before it was launched Scotland wide.

“Their input into the content of Better by Miles has been absolutely invaluable. The project has truly captured their imagination and they have shown great enthusiasm which is reflected in the photos and film footage charting their experience which form a vital part of the resource which is now available online to schools and community groups across Scotland.”

Julie Whyte, Acting Deputy Head Teacher, Muirfield Primary School said: “Better by Miles is an exciting resource which allows for a real in depth investigation into the food miles debate through the medium of drama.

“The children here at Muirfield took ownership of this project from day one and after the initial reading of a prepared script they took charge and dictated the direction that this learning experience took, from visits to local supermarkets to invitations to MSPs.  This was a wonderful experience for all.”