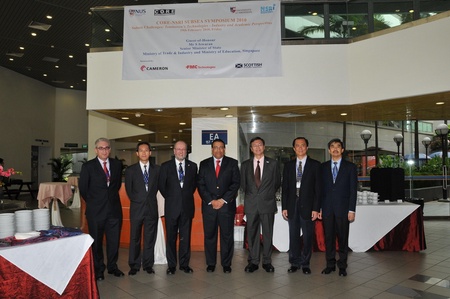 The institute - which focuses on the global development of subsea technology and expertise - was showcased at a joint symposium hosted by NSRI, and the National University of Singapore (NUS).

The one day event took place at the National University of Singapore.

The symposium also celebrated the development of research collaboration between NSRI and the National University of Singapore’s Centre for Offshore Research and Engineering (CORE).

Professor Albert Rodger, chief executive of NSRI and Vice-Principal and Head of the College of Physical Sciences, University of Aberdeen has spearheaded the alliance between the institutes that share the objective of supporting the development of future technologies for the subsea industry.

Professor Rodger, who spoke at the symposium, said: “The National Subsea Research Institute brings together industry and academia to focus on the development of research aligned with the needs of the global subsea sector in both the short and long-term.

“Building a worldwide network of industry members is key to fulfilling this objective.  The symposium aimed to engage new industry partnerships and further strengthen the global reach of NSRI’s research which will benefit the future of the subsea industry on an international scale.

“The event also celebrated the collaborative agreement between NSRI and CORE, which will bring together expertise from the two institutes to coordinate research efforts to optimise future subsea field developments.”

Bill Edgar, Chairman of the National Subsea Research Institute, who also spoke at the symposium said: "The establishment of mutually beneficial working relationships with other international centres of excellence in subsea technology research is extremely important to NSRI, as it seeks to deploy globally the comprehensive subsea technology database available to its researchers as a result of the UK's pre-eminent position in subsea activities over the last 20 years in the UKCS.  I am certain that the relationship with NUS will lead to significant developments which will benefit both organisations."

The organisations who are industry members of NSRI are: