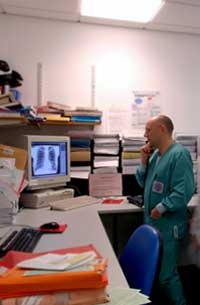 An Aberdeen doctor who helped devise the scene in Casino Royale when a poisoned James Bond saves himself after getting medical help remotely will give a talk on Monday night (February 13) about telemedicine.

Mr James Ferguson, National Lead for the Scottish Centre for Telehealth and Telecare and emergency medical consultant at Aberdeen Royal Infirmary, advised film producers for the part in the 2006 movie where medics give Bond life-saving advice over the phone on how to use a defibrillator.

At the time it may have seemed futuristic but that that kind of treatment is very much in use today as those attending Monday’s free public talk taking place at 6pm at the Suttie Centre on the Foresterhill health campus will hear.

Dr MacLeod will explain how stroke care is delivered via videolink to peripheral hospitals.

“Stroke can be a devastating condition, caused either by a clot in a blood vessel in the brain, or by a haemorrhage,” she said.

“Treatment to dissolve the clot has been shown to improve outcomes: but has to be delivered within four and a half hours of stroke onset.

“To help deliver equity of care to people in remote areas, we use telemedicine to link with Dr Gray’s, Stornoway, and shortly Oban and Wick, which means that patients who have strokes in areas where there are no stroke specialists, or where coming to a main centre would take too long, can be assessed and have their scan reviewed, and a decision made about treatment.

“Research has shown that this is a safe and effective way to deliver stroke care, and is acceptable with patients, carers and hospital staff.”

Mr Ferguson, who has been retained by Bond producers to provide telemedicine advice for other 007 movies, will tell Monday’s audience what is being done in the four priority areas – stroke management, paediatrics, mental health and chronic obstructive pulmonary disease – which have been identified for telehealth and telecare.

For example this could be patients with bronchitis being monitored in their homes by nurses monitoring data coming in via computer; specialist medical advice being given via videolink to non-specialist medical staff treating patients hundreds of miles away, a reduction in sick children being transferred to hospitals with more specialist care and patients with mental health problems receiving psychiatric help via skype.

Mr Ferguson said: “There needs to be fundamental changes in the way we deliver care. We have an ageing population, people are living longer with multiple long term conditions and large numbers of patients are coming to hospital who really doesn’t need to be there.

“Results from the largest trial of telehealth and telecare in the world, involving 6,000 patients in East London, Kent and Cornwall, showed that using technology to monitor patients in their own homes cut death rates by 45 per cent and reduced emergency admissions to hospital by a fifth.”

The North-east of Scotland is viewed by many as being among the world leaders in its use of telemedicine.

And Mr Ferguson is expecting a future that would not be out of place in a Bond movie.

“I expect the way we deliver healthcare in the years to come will be a completely different routine to what we have at the moment with healthcare advice delivered via mobile phones and TVs in our own homes,” he added.

Café Medand the University’s Café Scientifique series are supported by a science engagement grant from the Scottish Government.