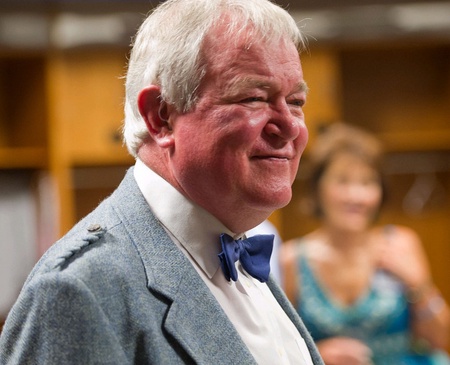 Dr Paul Schlicke dedicated almost four decades to teaching students at the University of Aberdeen the work of Charles Dickens.

To celebrate the 200th anniversary of the birth of the great author, the efforts of Dr Schlicke, who has also served as Chair of the Dickens Museum in London, have been rewarded with a visit to Buckingham Palace.

The former lecturer in English, who retired from the University in 2010, has been invited to attend a reception held by Her Majesty the Queen and the Duke of Edinburgh on Tuesday (February 14).

Dr Schlicke, who lives in Inverurie, said he was delighted to receive his invitation to the prestigious event.

“It will be an honour to attend.” he added. “Having spent my career working on Dickens it is nice to receive this kind of recognition.”

Dr Schlicke is author of Dickens and Popular Entertainment (1985), editor of the Oxford Companion to Charles Dickens (1999, 2011), and is past president of the international Dickens Fellowship and of the Dickens Society of America.

He has been a trustee of the Charles Dickens Museum since 2004 and served as chairman between 2005 and 2009.

“Dickens has become recognised increasingly as the most important writer in English since Shakespeare,” he added.

“Interestingly like Shakespeare he had a large popular appeal as well as one to academic and literary specialists.

“He is probably the single most referred to source for what life was like in the mid 19th century England, particularly London.  Dickens was one of the great comic writers in our language and his insight into psychology and into social issues was very great indeed.”

Dr Schlicke said Dickens’s enduring appeal is a reflection of his status and the ability of his writing to reach out to those beyond the literary elite.

“What seems clear to me is that Dickens was really the first ‘celebrity’. He was still in his 20s when he was given the freedom of the city of Edinburgh and he travelled to America when he was just 30-years-old. When he arrived people lined the docks to see him and were waiting for him outside his hotel – rather like the Beatles all those years later.

“He is still bringing pleasure to people all over the world and I’m pleased to see so much is being done to commemorate this important anniversary and I’ll be closely involved with planning events to take place here in Aberdeen.”