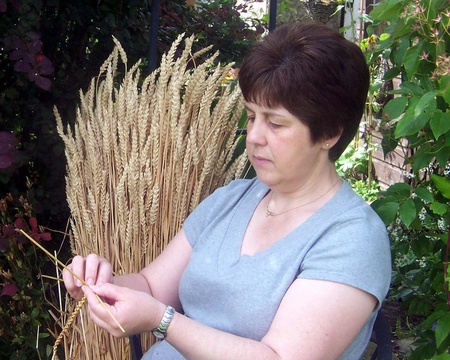 Renowned north-east artist Elaine Lindsay will share her journey from the cornfield to the catwalk with an audience in Aberdeen.

Elaine, of Inverurie, has taken the art of traditional straw weaving to new levels and has seen her work displayed around the world.

She will present Corn Dollies and Straw Work in Scotland: from Cornfield to Catwalkon Tuesday January 26 as part of the University of Aberdeen’s Elphinstone Institute public lecture series.

Elaine began making corn dollies around 1985 as a hobby, but it soon became a large part of her life and her repertoire grew to include contemporary as well as traditional straw work.

In 1989 she joined the Guild of Straw Craftsmen and achieved her Craftsman Award with the Guild in 1999. She is also a member of the National Association of Wheat Weavers in America

Elaine has gained a reputation for her work internationally and in 2008 she taught at the International Straw festival in Hungary and this year has been invited to teach at the John Campbell Folk School in North Carolina.

She has also designed and made accessories for catwalk shows in New York, Paris and London and has worked with designers such as Luella Bartley and J W Anderson. In 2009 she made some large straw pieces for London shop window displays and has also produced work for the BBC and various stage productions.

During the public lecture, which will be held in Room MR028, MacRobert Building, King’s College, University of Aberdeen, she will take the audience on a straw journey, demonstrating the versatility of the material, from traditional to contemporary designs.

She will also explore different plaiting methods and will help audience members to make their own hairst brooch.

Dr Thomas McKean, deputy director of the Elphinstone Institute, said: “Elaine Lindsay is an exceptionally talented local artist and I think people will be amazed by the intricacy and versatility she brings to an ordinary material familiar to everyone in the north-east.

“We’re delighted to welcome her to the University for what promises to be a popular event.”

Elaine Lindsay’s lecture will run from 7.30pm to 9pm on January 26. Admission is £3 including refreshments and all are welcome; contact the Elphinstone Institute on 01224 272996 for more information.