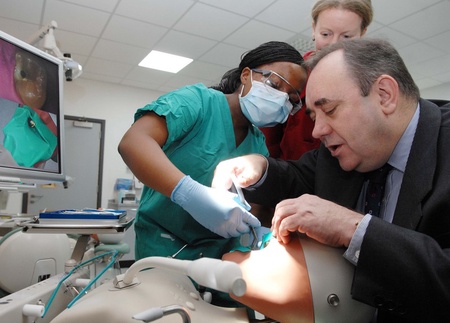 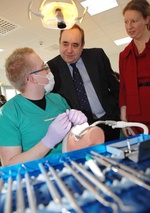 Aberdeen Dental School will produce 20 fully-qualified dentists every year and will significantly increase the number of people entering the profession in Scotland.

The £17.7 million flagship facility, which has been treating NHS patients since June, uses state-of-the-art technology to train the next generation of dentists.

Incentives are in place to encourage more graduates to work within the NHS and to practise in the North East of Scotland, improving access to dentistry for thousands of people.

The project, which has been funded by the Scottish Government and NHS Grampian, was delivered on time and £2.5 million under budget.

First Minister Alex Salmond said: “The Scottish Government is committed to reversing the long term decline in dentists in Scotland. Since March 2007, the number of dentists has risen by more than 10%, and we are determined to ensure that this trend continues.

“This fantastic facility, which was delivered on time and significantly under budget, will play a key part in the Scottish Government’s drive to improve the dental service provided to the people of Scotland.

“Aberdeen Dental School will deliver a significant increase in the number of NHS dentists, and our incentives will help ensure that they stay here and continue to practise in areas such as the North East, where there is most need.

“I am confident that this school will become a cornerstone of Scotland’s health service and educational tradition, producing highly skilled dentists for many years to come.”

Public Health Minister Shona Robison said: “Under this Government, the number of people who have access to an NHS dentist continues to rise. Everyone in Scotland should have access to good quality healthcare and oral health is a key part of wellbeing. That is why we have realised this key manifesto pledge so promptly.

“It’s just over a year since I opened Aberdeen Dental School’s temporary home and I am delighted to officially open this world class centre of excellence, it is an impressive asset for the North East and the whole of Scotland.”

Dr David Cameron, Chairman, NHS Grampian said: "The University of Aberdeen Dental School and Hospital is a unique and high quality facility which will provide comprehensive oral/dental education and services, and put Grampian in an excellent position to train, recruit and retain dental professionals.  The facility represents a major step forward for dentistry in Grampian."

Professor Sir Duncan Rice, Principal and Vice Chancellor of the University of Aberdeen said:  "The establishment of the University of Aberdeen Dental School and Hospital is a significant addition to our portfolio of specialisation in medical research and health. Its establishment on the Foresterhill site further enhances what has become one of the largest medical campuses in Europe. It will bring great benefits to the people of the North of Scotland. "

Professor William Saunders, Dean of the School of Dentistry at the University of Dundee, said: “‘The University of Dundee is privileged to have had major involvement in the development and implementation of the new Dental School in Aberdeen. Our partnership with the Scottish Government, the University of Aberdeen, NHS Grampian and NHS Education for Scotland has worked extremely well and the experience and expertise in undergraduate dental education we bring to the new School has ensured a strong foundation for this joint venture.”

Dr Jim Rennie, Dean for Dental Postgraduate Education, NHS Education for Scotland said: “NHS Education for Scotland is delighted to have been involved in the development of the Aberdeen Dental School and Hospital. To establish a new dental school from scratch in less than two years and to have a new building as impressive as the dental school one year later is indication of the commitment and drive of all parties involved.

“It has been a true partnership project between the universities of Aberdeen and Dundee, NHS Grampian, the Scottish Funding Council, the education and health directorates at the Scottish Government and ourselves. We have enjoyed having the students in the adjacent Aberdeen Dental Education Centre while the Dental School Building has been constructed.”