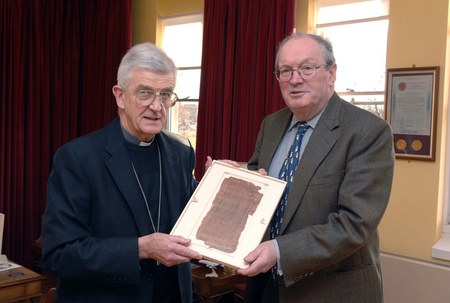 The Bishop of Aberdeen presented the University with a facsimile of papyri dating from the 3rd century and given to him by Pope Benedict XVI, this week.

The Right Reverend Peter A Moran, presented Professor Sir Duncan Rice, Principal and Vice Chancellor of the University of Aberdeen, with a facsimile of the ancient document, gifted to him in Rome in October 2008.

It comes from a collection of papyri, probably discovered in Egypt, which appeared on the antiquities market in the 1950s. They were purchased in 1955-56 by two main collectors, Sir Alfred Chester Beatty and Martin Bodmer.

The Chester Beattie papyri went to Dublin and the Bodmer papyri to a small museum at Cologny on the outskirts of Geneva.

In November 2006 Mr Frank J. Hamma III purchased from the Bodmer Museum, Bodmer papyruses 14 and 15. These date from the early years of the 3rd century AD and contain the Gospels of John and Luke.

In the numbering of papyri commonly adopted by Biblical scholars, Bodmer 14 and 15 are referred to as P75.

In January 2007 Mr Hanna formally gifted P75 to Pope Benedict XVI and it was added to the manuscript holdings of Vatican Library.

In October 2008 the Synod of Bishops of the Roman Catholic Church held its three-year General Assembly, which 250 bishops attended.

At the conclusion of the Assembly, Pope Benedict presented each participant with a boxed facsimile of two leaves of the papyrus, along with a book explaining both the history of the papyrus itself and some aspects of its significance for the study of the transmission of the texts of the Gospels.

Professor Chris Gane, Head of the College of Arts and Social Sciences, University of Aberdeen, said: “We are delighted to receive a facsimile of this important document, which further reinforces the University’s ancient links with the Church

“It is a significant piece of history to add to the University of Aberdeen’s extensive collections.”