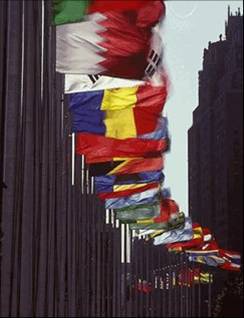 Professor Gill, SixthCentury Chair in Integrated Land Use within the School of Geosciences, and Professor Graham, Professor of Obstetric Epidemiology and Principal Investigator of Immpact, are both seconded on a part-time basis to work with the DFID policy and research teams.

The new advisers will be supporting policymakers in their use of evidence towards achieving the United Nations’ Millennium Goals.

Professor Graham had major input into an announcement made in New York this week at the United Nations General Assembly in New York by Prime Minister Gordon Brown and Robert Zoellick, President of the World Bank Group. They unveiled the Consensus for Maternal, Newborn and Child Health which calls for accelerated and bold action at global and national levels in order to make progress toward three of the Millennium Goals.

The aims of the Consensus include preventing the deaths of up to one million women from pregnancy and childbirth complications and saving the lives of millions of newborn babies and children.

Professor Graham’s contribution to the Consensus was via her DFID role as well as her positions as board member for Maternal, Newborn and Child Health and the Maternal Mortality Campaign, chaired by Sarah Brown, the Prime Minister’s wife.

She said: “This is what researchers and academics hope to achieve, for their work to make a difference. Sometimes research can be so ‘upstream’ that the researcher doesn’t have the opportunity to see their work being translated and used for the benefit of people.

“It is a great honour for our research and expertise and for the University of Aberdeen to contribute to international development in such a direct way.”

Professor Gill is also Chief Scientific Adviser on Rural Affairs and the Environment to the Scottish Government and former Director of the Macaulay Land Use Research Institute.

Her new DFID role involvesproviding a constructive challenge to the existing evidence base on agriculture and food security in developing countries, as well as advising on ways to strengthen the links between the science and policy at national, regional and international levels.

Professor Gill added: “I am delighted to be given the opportunity to contribute to thinking on how the world can prepare to feed a population of 9 billion in 2050.

“There are multiple challenges of climate change and potential water and energy shortages ahead which a robust evidence base, generated by research, can help to solve.”