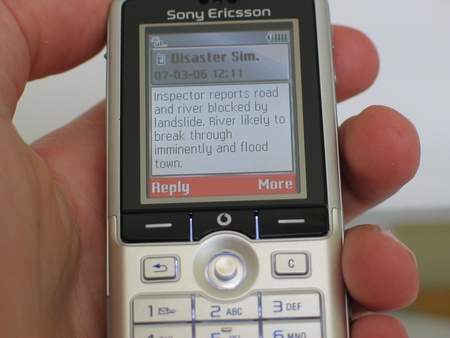 The creation of a computer application which can simulate disaster scenarios has put a University of Aberdeen support officer in the running for a top national award.

Phil Marston, Learning Technology Adviser at the Centre for Learning & Teaching, has been shortlisted in the Tertiary, FE & HE Category for the Practitioner Award at the 2009 Handheld Learning Awards.

He is one of three finalists selected and the winner will be unveiled at the Handheld Learning Conference at an awards dinner on October 5.

It is the world’s leading event about learning using mobile and inexpensive access technologies, attended by more than 1,500 international delegates

Mr Marston was nominated for an application he designed, which is used by geography students and enables them to participate in an interactive disaster scenario.

Level Three and Four students on the University’s Applied Geomorphology course use the technology to demonstrate and apply their knowledge of geomorphology to provide useful insights into what is going on during an earthquake, flood disaster of volcano eruption.

Mr Marston said he developed the idea to provide a simulation activity which is more realistic than other options available.

He said: “Other simulations usually involve sitting in front of a computer screen in a classroom for the length of a class, say an hour, and manipulating things on the screen.

“That is not very realistic so we decided to make it happen over a 72-hour period based on a real event.

“All the information is delivered via text message and the students respond about what to do next using the same method.

“This allows them to act as consultants to a particular disaster situation.”

Mr Marston came up with the idea in 2005 and has continued to refine the application. It is used every second year and students embarking upon the Geomorphology course this term will benefit from the program.

He said it has also revealed interesting results from a research perspective – so much so that he about to start his own PhD, investigating the findings further.

“The application has proved really popular with students and I’m delighted to have been nominated for the Handheld Learning Awards,” he added.

“It’s taken some time to develop the disaster simulation, now we’re looking to see in what other contexts the software can be used.”

Mr Marston, who is in talks to produce the program commercially, will be presenting a paper outlining his initial research ideas at the Handheld Learning Conference on October 7 .

The software was developed in house by Ian Finlayson, University of Aberdeen, and runs on the University’s webserver using a combination of PHP, MySQL and a link to an external SMS service provider.

A narrative is developed and the simulation database is then populated with the details. The students register and then start receiving messages, some of which they have to respond to.

“The storms have finished, with max. 25mm of rain at any of gauging station. The river in Laval rose 1.3m about 10 hours after peak rainfall, but below flood level. It has now returned to normal.”

“Intense thunderstorms are forecast for the late afternoon. Should we stand down the flood alert you called earlier or start to reinforce the protective measures guarding the hospital, schools, communications and food supplies”