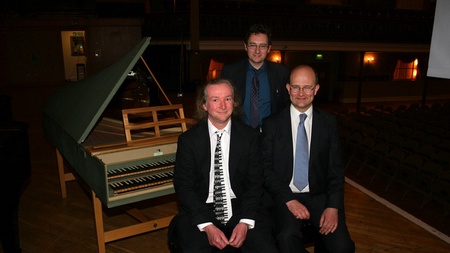 More than 300 people descended on Aberdeen Music Hall for a special University of Aberdeen lecture to mark the 150th anniversary of the concert hall.

The lecture, Mozart, Maths & Mechanics, was delivered by Professor Dave Benson, of the Institute of Mathematics, and Dr David Smith, of the Music Department, and sponsored by the British Science Association.

The presenters used a variety of musical demonstrations to highlight the evolution of musical scales and in particular the maths that can be used to explain them.

As a finale, David Smith played a piece on the Music Hall's pipe organ which had been specially tuned for the evening.

Dr Ken Skeldon of the University's Public Engagement with Science Unit said: "The speakers did a splendid job of presenting a challenging and thought provoking topic.

“The lecture was designed to bring the sciences and the arts together and we certainly achieved that, particularly given the diversity of the audience and the range of questions we took afterwards".

The lecture was billed as part of the TechFest in September Festival, which is currently underway and features more University of Aberdeen staff and students than ever before.

Before the festival fortnight is out, more then 20,000 people will have attended 150 events, including 35 featuring and developed by University staff.

The Music Hall lecture was an inaugural event, marking a new partnership between Aberdeen Performing Arts and the British Science Association in the region.

Dr Skeldon, who also Chairs the Associaition in Aberdeen, added: "We look forward to staging further large scale events which merge the arts and sciences in the years to come, using the fantastic acoustics and space offered at the Music Hall".