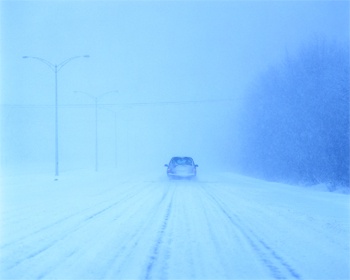 Using cutting edge artificial intelligence technology the RoadSafe system can provide council road maintenance teams with the up to date and accurate information they require on which roads need to be gritted in their area and when.

It is hoped the system could be used to help prevent and reduce road traffic accidents caused by harsh weather conditions.

RoadSafe has been developed by University of Aberdeen PhD student Ross Turner who worked in partnership with Banchory based weather forecasting organisation Aerospace & Marine International (AMI) to create the system using technology developed by the institution's Department of Computing Science.

Traditional weather forecasting is based on simulation models that produce weather information presented in the form of tables and graphs, which are then passed directly to a human forecaster to be analysed and drafted into a weather summary.

The RoadSafe system takes these tables and graphs and uses new technology to create a simple draft text summary for the forecaster.

A standard system of terminology is used to describe different weather conditions in every summary which is generated.

This speeds up the delivery of crucial weather information and eliminates ambiguities brought about by individual writing styles.

The system has already been piloted in live trials with weather forecasters at AMI during their winter road maintenance operations. Operational staff at various local authorities throughout the UK have also evaluated the system, reporting positive feedback.

Ross said: "The aim of RoadSafe is to improve road conditions over the winter season by speeding up the delivery and enhancing the efficiency of the weather information which is passed on to council road maintenance departments.

"The system is used to analyse the computer simulated weather forecast information and produce a draft forecast text.  It uses what is known as natural language generation technology to break down the computer generated forecast into a standardised language where the same terminology is used every single time.  This summary is then passed on to the weather forecaster for editing and then issued to road maintenance departments.

"Forecasters are faced with the task of analysing huge amounts of data in very short periods of time, automating the writing and basic data analysis aspects of the task allows them to spend more time ensuring the content is correct."

James Brownhill, Director of Business Development, Aerospace & Marine International said: "There are many challenges in providing weather forecasts to, for instance, the general public, high risk industries like offshore oil exploration, or critical safety operations such as the prevention of ice on our highways.

"One challenge is to provide accurate forecasts, and that is strictly in the hands of the meteorological community where massive numerical models of the atmosphere have had great success but these same models provide a huge volume of information.  Consequently the operational meteorologist is challenged with converting the model's numbers in a timely manner into a forecast that can be correctly interpreted by the end user.

"Although there has been a tendency to present forecast weather information in graphical form - and this is preferred by the end user - research shows that the most accurate interpretation by the human brain is achieved through reading textual forecasts.

It is hoped that the service can evolve in the future into a text alert system whereby road maintenance personnel would receive the latest weather information via their mobile.

Ross continues: "There are many potential ways in which this technology can help to further speed up the delivery of information to ground level road maintenance staff to make it as immediate and reactive to the weather as possible.  This includes text alert systems which would involve those actually operating the gritting vehicles receiving messages via their mobile phones to alert them to where they need to be operating during their shift as the weather develops."