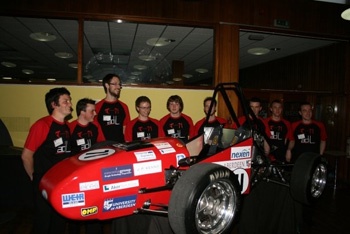 A group of Aberdeen students are revving up for success on a world famous race track with a car they have built entirely from scratch.

The team of engineering students from the University of Aberdeen will take part in the International Formula Student competition at Silverstone on the 18 and 19 July.

The competition sees students from across Europe, the Americas, Asia and Australia take on the challenge of designing, building and then racing a formula style racing car.

This is the first time a team from Aberdeen has entered the annual competition which is organised by the Institute of Mechanical Engineers.

The 16 strong group – named TAU Racing – has been working on the project since last November, spending 10 to 20 hours each day creating the machine they hope will pip the opposition to the post.

The majority of the parts for the single-seater car have been fabricated by the team from scratch.

Support has been gathered from various local organisations raising over £14,000 for the project, with Asset Development and Improvement Limited (ADIL), an oil and gas field development and operations management specialist, acting as the team's main sponsor.

Now in its final stage of completion, the car is being tested by the students to ensure they are on winning form for the competition.

Twenty three year old Matt Springer originally from Chester, team leader of TAU Racing and a final year student studying for a degree in Mechanical Engineering with Management at the University of Aberdeen said: "We have been working long hours on the car since last November and we are now at the point of testing it under race conditions.

"The project has been a fantastic challenge for the team involved, allowing us to apply the knowledge and information we are learning in our engineering degrees, to a real life scenario.  It has also enabled us to develop other skills such as time and project management, which we know will be hugely valuable to us in our future careers.

"We're excited to be the first team from Aberdeen to enter the competition. Engineering students from all degree years have been involved, and we hope that annual entry into the International Formula Student competition will now become a firm tradition for University of Aberdeen engineering students in the year's to come.

"A huge amount of time, effort and elbow grease has been ploughed into the project and we're extremely proud of what we have achieved as a team.  We have high hopes that our car will have the right combination of power and style to make it first past the post on competition day!"

Professor Tom O'Donoghue, Head of the School of Engineering at the University said: "The enthusiasm and dedication which the University of Aberdeen's TAU Racing team has applied to this project is commendable.  The competition has been an ideal opportunity for students from across academic years to come together and enhance their studies by applying what they are learning in their degree programmes in a practical context."

James Paton, Managing Director of ADIL said: "When TAU Racing 'pitched' to us for sponsorship we gave them a really good grilling about their project management skills. We were particularly concerned that they may not be able to deliver a competitive car in the first year of the team.

"They really impressed us - they had well thought through responses to all our concerns and were clearly well organised and very committed to the project.  It is great to see that they have successfully completed the design, build and testing of the car and we wish them well for the race at Silverstone."