Can radar be used to deter bats from approaching wind turbines?
16 July 2009 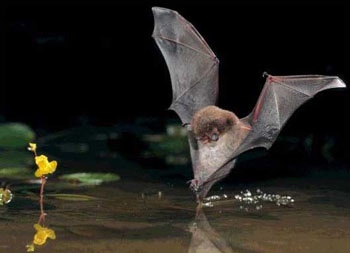 Large numbers of bats are killed by colliding with turbine blades or by experiencing sudden depressurisation immediately adjacent to the blade.

In an attempt to reduce this mortality rate, University of Aberdeen scientists Barry Nicholls and Paul Racey, funded by the People's Trust for Endangered Species have shown that there is a significant reduction in bat activity when a portable radar beam is directed at their foraging sites.

The UK government is committed to ensure that 10% of the country's electricity will be generated from renewable sources by 2010 with an aspiration to double this figure by 2020.

There are now 206 operational wind farms across the UK, with 2381 turbines in use. Plans for another 444 sites means that the effects on our bat population – not to mention birds – could be significant.

Although little work has been carried out in the UK, a six week study on two American farms in 2004 recorded a total of over 4,500 bat fatalities from collisions with the turbines.

Attempts at mitigating bird collisions with wind turbines have typically involved the use of visual stimuli to make the turbine blades more conspicuous.

However this clearly wouldn't work well for bats, where hearing is their primary sense. Anecdotal evidence, including that of bats foraging offshore in Sweden avoiding an area around Utgrunden lighthouse, where a powerful radar was in permanent operation, led Nicholls and Racey to investigate whether a deterrent effect can be replicated by using a small portable radar system.

Over the summers of 2007 and 2008 they carried out repeated experiments using both rotating and fixed radar antenna, and different pulse lengths to see which, if any methods, were the most effective.

Encouragingly their results demonstrated that an electromagnetic signal from a small radar unit with a fixed antenna significantly reduced the foraging activity of bats within 30 metres of the unit. The effect is reversible – bats return when the radar is switched off and not all bats leave when it is switched on.

Commenting on these initial findings, Nida Al-Fulaij, Development Officer PTES says: "We are delighted that this important research is leading to practical conservation outcomes that will effectively protect bat populations.

So while PTES fully supports the development of wind farms as a renewable source of energy, it is vital that we identify ways to ensure that wind farms are not a threat to the native wildlife PTES is working so hard to conserve."

Future work now needs to be conducted by radar engineers, working in conjunction with bat biologists, to develop a portable radar system which can be manipulated to produce a wider range of electromagnetic outputs. The parameters most likely to be important are the frequency, pulse length/pulse repetition rate and power output of the signal.

·        The full article entitled "The Aversive Effect of Electromagnetic Radiation on Foraging Bats-A Possible Means of Discouraging Bats from Approaching Wind Turbines" will be published in PLoS ONE on Thursday 16 July. The paper will be available online at : http://dx.plos.org/10.1371/journal.pone.0006246.   About PTES ·         People's Trust for Endangered Species is a UK conservation charity created in 1977, which works in partnership with voluntary organisations, wildlife experts, government and industry to conserve wild mammals and their habitats throughout the world. PTES protect some of our most threatened wildlife species through providing practical conservation support through research, grant-aid and educational programmes, including wildlife surveys, publications and public events.   ·         More information about PTES can be found at www.ptes.org