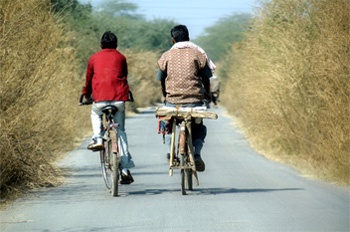 You never forget how to ride a bicycle – and now a University of Aberdeen led team of neuroscientists has discovered why.

Their research, published this month in Nature Neuroscience, has identified a key nerve cell in the brain that controls the formation of memories for motor skills such as riding a bicycle, skiing or eating with chop sticks.

When one acquires a new skill like riding a bicycle, the cerebellum is the part of the brain needed to learn the co-ordinated movement.

The research team, which includes scientists from the Universities of Aberdeen, Rotterdam, London, Turin and New York, has been working to understand the connections between nerve cells in the cerebellum that enable learning.

Dr Peer Wulff, who led the research in Aberdeen together with Prof. Bill Wisden at the University's Institute of Medical Sciences, said: "What we were interested in was finding out how memories are encoded in the brain. We found that there is a cell which structures the signal output from the cerebellum into a particular code that is engraved as memory for a newly learned motor skill. "

It could pave the way for advancements in prosthetic devices to mimic normal brain functions, which could benefit those who have suffered brain disorders, such as a stroke or multiple sclerosis.

Dr Wulff said: "To understand the way that the normal brain works and processes information helps the development of brain-computer interfaces as prosthetic devices to carry out the natural brain functions missing in patients who have suffered a stroke or have multiple sclerosis.

"Our results are very important for people interested in how the brain processes information and produces and stores memories. One day these findings could be applied to the building of prosthetic devices by other research teams."

This research was funded by the Medical Research Council.