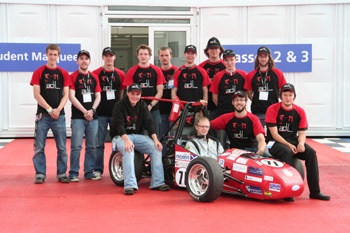 A group of Aberdeen students are celebrating triumph on a world famous race track with a car they built entirely from scratch.

The team of engineering students from the University of Aberdeen ranked higher than any other Scottish team in the International Formula Student competition which took place at Silverstone last week.

The 16 strong group – named TAU Racing – took 24th place overall, and were the 7th highest ranking British team in the annual global competition which saw 87 teams of students from institutions worldwide, take on the challenge of designing, building and then racing a formula style racing car.
Rankings in the competition were graded on elements including car design, economy, presentation and performance.
The Aberdeen team also took home a hat-trick of awards - securing the Airbus Teamwork Award, the Shell Most Fuel Efficient Car in Class One Award and the inaugural Allan Staniforth Best Newcomer Award.
The Airbus Teamwork Award earned the team £500 and the opportunity to visit Airbus's development headquarters in Bristol where they will develop and optimise a new part for the car they will build for next year's competition.
This is the first time a team from Aberdeen has entered the competition which is organised by the Institute of Mechanical Engineers, and is Europe's largest educational motorsport event.
A total of 105 universities from 23 countries took part in this year's event which featured five racing categories.
The TAU Racing team took 9 months to complete their single-seater racing car, with the majority of parts fabricated by the team from scratch.
Over £14,000 was raised by the team in support of the project, from various local organisations.
Oil and gas field development and operations management specialist Asset Development and Improvement Limited (ADIL), were the team's main sponsor.
The team was also assisted by the University of Aberdeen Alumni Fund which receives donations from alumni around the world to support students at the University.
23 year old Matt Springer originally from Chester, team leader of TAU Racing, who graduated from the University with a degree in Mechanical Engineering with Management earlier this month said: "To rank higher than any other Scottish team and achieve such strong ranking positions against both our international and UK competitors was a tremendous triumph for the TAU Racing team.
"This is the first time we have entered the competition and we were competing against teams with far more experience, greater man power and significantly higher budgets.  Engineering students from all degree years were involved in the project which has been fantastic experience of applying what we are learning in our studies in a real life scenario.  The competition was a real test for us all as individuals, challenging our teamwork, timekeeping, and management skills
"To come home with both the high level rankings and a hat-trick of competition awards is the greatest possible recognition of the many hours of hard work and dedication we put into the project. "

The TAU Racing team hope to continue their winning streak in the annual competition next year with plans in place to begin building a new car later this year.

Dr Richard Neilson from the University of Aberdeen's School of Engineering said: "The members of the TAU Racing team have been brilliant in how they have worked together and played to each others strengths, and the Airbus award for Teamwork was very well deserved.  To have won the Class 1 Fuel Economy event and come 6th in the Class 1 Endurance race at Silverstone against large, experienced teams like the University of Stuttgart and the Technical University of Delft is tremendous.

"To put this in perspective, it is usually considered very unlikely that a team competing for the first time will even complete all events far less win any, so this is an incredible achievement – one which I think will attract students to the School.  It has also put Aberdeen very firmly on the map across Europe as a University to take notice of in terms of Engineering.

"The competition presented an ideal opportunity for the team to apply the skills they were learning in their academic studies in a real life context.  Staff from the University of Aberdeen's School of Engineering, look forward to continuing to support the team in their aspirations in the annual International Formula Student competition in years to come."

The TAU Racing team took part in the International Formula Student competition at Silverstone on the 18 and 19 July.

The Shell Most Fuel Efficient Car in Class One Award is awarded to the team that uses the least fuel over the 22km, 25lap endurance course on the Silverstone track.

The Allan Staniforth Best Newcomer Award is awarded to a team which has not previously competed at Formula Student and makes significant success within the competition.  2009 marked the inaugural year of this award.

The full list of organisations who sponsored the TAU Racing team is as follows: