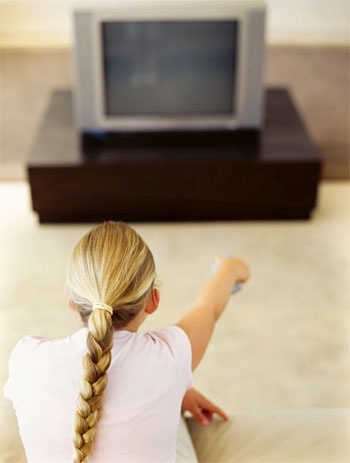 Pre-school children who watch a lot of television are considerably fatter than those who don’t, according to a major new study.

Children who spend just an hour extra in front of the telly each day are on average one kilo fatter than their counterparts who watch less, scientists found.

But inactivity is not to blame says the University of Aberdeen team, following a three year study of 89 two to six-year-olds.

Instead the problem appears to lie with food intake. The researchers suggest that kids could be snacking unhealthily during viewing or are stimulated to eat by what they see on TV.

Dr Diane Jackson, of the University of Aberdeen's Rowett Institute of Nutrition and Health, led the research which has just been published in the American Journal of Clinical Nutrition.

She said: "This data is part of the Rowett assessment of appetite and metabolism study or RASCAL study which set out to investigate the predictors of body fat in young children.

"As part of this we investigated whether TV viewing is associated with body fatness, physical activity and calories burned.

"Using a range of techniques, including a state of the art method which measures calories burned during daily life, we measured the children's physical activity levels, their body fat and how many calories they used.

"The results showed a clear positive link between how much time per day the children spent watching TV and how fat they were.  Children who watched TV for 60 minutes more than other children in the study had approximately 1kg more body fat."

Professor John Speakman, Director of the Institute of Biological and Environmental Science at the University, who was also an author on the study, said: "On the face of it the link between TV watching and fatness might seem obvious – when children are sitting watching TV they are not burning up calories on physical activity.

"However we found it wasn't reduced physical activity that was making the children fatter.  This means it was more probably a link with their food intake.

Children involved in the study watched an average of two hours of TV a day.

Dr Jackson added: "Given that TV programming for young children has increased in recent years the relationship between TV viewing and diet may be a promising target for future obesity interventions."

The Rowett Institute of Nutrition and Health, together with the Moredun Research Institute, Scottish Crop Research Institute, Scottish Agricultural College and the Macaulay Institute is one of the Scottish Government's Main Research Providers (MRPs). The Scottish Government provides total funding of around £60 million per year to the MRPs in support of four programmes of strategic research.  For more information go to: http://www.scotland.gov.uk/Topics/Research/About/EBAR