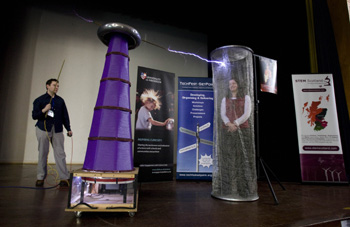 Over 300 pupils at Perth High School have been hearing how their choice of subjects now could influence their future career prospects.

The special event took place over three daytime sessions and one evening parents' session and was aimed at S2 pupils who are currently considering their standard grade subject options.

The event, coordinated by TechFest-SetPoint, was funded by the Scottish Government "Do Something Creative, Do Science" campaign developed by the Office of the Chief Scientific Advisor, and launched a few weeks ago in Edinburgh.

Dr Ken Skeldon of the University of Aberdeen's Public Engagement with Science Unit introduced the pupil sessions with a whistle-stop tour of science props made for television before joining a careers fair with the help of materials provided by the University's Student Recruitment and Admissions Service.

Teachers as well as pupils gained useful insights into current career options in science, engineering and technology thanks to a range of contributors from industry and academia and the day was very well received by both pupils and staff at the school.

It is hoped that the Perth event will also open up new avenues for encouraging Science, Engineering, Technology and Maths activity in the Perth and Kinross region.

Liz Hodge, managing director of TechFest-SetPoint said "We are very excited about the success of the Perth High School event and we hope to follow it up with other activities in the region".

The "Do Something Creative..." campaign aims to challenge the belief held by many pupils that science is dull or too difficult. By highlighting the diversity and quality of career paths a good set of science qualifications can bring it is hoped to encourage more pupils to choose science options at the all important S2 to S3 transition.

Dr Skeldon said "The time when pupils are choosing their standard grade subjects is extremely important and yet is all too often ignored, or targeted too late. Many may turn off science because of a lack of career advice or role models and so there is a great opportunity to make an impact in schools at this key time of the year. Despite the choice of university being a long way off, many pupils already had ideas about what they wanted to study and even where they wanted to go, and our University of Aberdeen course booklets and junior prospectuses were all quickly snapped up."

More information on the "Do Something Creative..." initiative can be found at http://www.infoscotland.com/science/