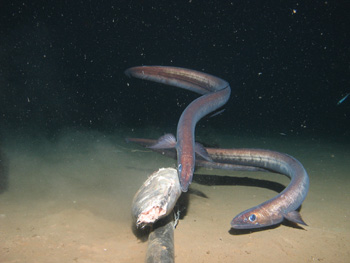 Commercial fishing in the north-east Atlantic could be harming deep-sea fish populations a kilometre below the deepest reach of fishing trawlers, according to a 25-year study published on Wednesday.

Scientists have long known that commercial fishing affects deep-water fish numbers, but its effects appear to be felt twice as deep as previously thought.

Dr David Bailey of the University of Glasgow, who led the study - published in the journal Proceedings of the Royal Society B - said:

"Commercial fishing may have wider effects than anyone previously thought, affecting fish which we assumed were safely beyond the range of fishing boats. We were extremely surprised by this result and believe that it has important implications for how we manage the oceans."

Populations of north-east Atlantic commercial deep-water fish such as black scabbardfish, orange roughy and roundnose grenadier have dwindled since deep-water fishing started in the area in the late 1980s, but it wasn't until 2003 that catch quotas were recommended.

Researchers started mapping the distribution of deep-water fish on the slopes off the west coast of Ireland in 1977 in an effort to understand more about the fish that live there and their biology. They used Natural Environment Research Council-owned ships RRS Discovery and RRS Challenger to continue recording species over an 11-year period until 1989 - before any fishery was established in the region. They then mapped the slopes again from 1997 until 2002 using the same ships and the same fishing methods to get a consistent data set.

As part of a European Union-led project to study species in deep-sea environments – HERMES, the researchers then compared the abundance of fish in the two different periods.

They unexpectedly found that deep-sea fish numbers down to 2500 metres - a kilometre below the deepest reach of fishing trawlers - were lower in the later 1997 to 2002 period. Not only this, but target species and non-target species were both affected and in much deeper parts of the ocean. Numbers of one species of eel has dropped by half. Most deep-water trawlers harvest down to 1600 metres.

"This study is unique in that we have over 10 years of scientific data from before 1990 when the commercial fishery took off so we can accurately detect the decline," said Professor Monty Priede of the University of Aberdeen's Oceanlab.

"The deep-seas fishery targets relatively few species, such as roundnose grenadier and orange roughy and unwanted species are discarded. These can make up around 50 per cent of the catch and because of the extreme change in pressure and temperature when they're brought to the surface, none of these will survive. This explains why the study has shown a decrease in abundance of target and non-target species.

"Each deep-water species has a defined depth range and very often the juveniles live at depths shallower than the adults. Removal of fish by commercial trawling down to 1600 metres is likely to affect populations in deeper waters," said Dr John Gordon of the Scottish Association for Marine Science and a member of the study team.

Fishery managers must now take into account adverse ecosystem effects, not just the abundance of the fish stocks being targeted and trawling may need to be restricted more than it is now.

There are plans for Marine Protected Areas in the north-east Atlantic, which are being considered by the OSPAR Convention. But this might not be enough.

"Marine Protected Areas need to be much bigger than the existing coral-protecting MPAs. They are not very effective for mobile fish species unless the fishing effort itself is reduced," said Professor Priede.

"MPAs might not be as effective as we'd hoped since we can detect the depletion of fish up to over 50 miles outside the fishing zone," added Dr Bailey.

"The general consensus is that deep-water fisheries are unsustainable and most if not all should be closed," said Dr Gordon.

The study, funded by the Natural Environment Research Council, European Commission and the Marine Conservation Biology Institute, involved researchers from the University of Glasgow, the British Antarctic Survey, the Scottish Association for Marine Science, Highland Statistics and the University of Aberdeen's Oceanlab.

1.     The Natural Environment Research Council funds world-class science, in universities and its own research centres, that increases knowledge and understanding of the natural world. It is tackling major environmental issues such as climate change, biodiversity and natural hazards. NERC receives around £400m a year from the government's science budget, which is used to provide independent research and training in the environmental sciences. Further information about NERC can be found at: http://www.nerc.ac.uk/

2.     The final analysis of the project is part of the European Union-funded Hotspot Ecosystem Research on the Margins of European Seas (HERMES).

3.     HERMES is an international, multidisciplinary research programme investigating Europe's deep marine ecosystems and their environment. Funded by the European Commission, HERMES brings together expertise in biodiversity, geology, sedimentology, physical oceanography, microbiology and biogeochemistry so that the relationships between biodiversity and ecosystem functioning can be better understood. For further information about HERMES, go to: www.eu-hermes.net/

4.     Founded in 1451, the University of Glasgow is one of the top 100 universities in the world with an international reputation for its research and teaching and it plays an important role in the cultural and commercial life of the country. The University is a major research powerhouse, with annual contract income in the top ten of UK universities.

5.     The Cambridge-based British Antarctic Survey (BAS) is a world leader in research into global environmental issues. With an annual budget of around £45 million, five Antarctic Research Stations, two Royal Research Ships and five aircraft, BAS undertakes an interdisciplinary research programme and plays an active and influential role in Antarctic affairs. BAS has joint research projects with over 40 UK universities and has more than 120 national and international collaborations. It is a component of the Natural Environment Research Council. More information about the work of the Survey can be found at:  http://www.antarctica.ac.uk/

6.     The Scottish Association for Marine Science (est 1884) is Scotland's largest and oldest independent marine science organisation committed to conducting world-leading research and education that contribute to an improved stewardship of the marine environment. With expertise in all core science disciplines SAMS research focusses on topics including global climate change, marine life sciences, marine policy and sustainable use of marine resources. SAMS is a collaborative centre of the Natural Environment Research Council, and - with 13 partners - is involved in developing a new university for the highlands and islands of Scotland. For more information, please visit http://www.sams.ac.uk/

7.     The University of Aberdeen's Oceanlab.is the sub-sea research facility of the University of Aberdeen. Our engineers lead the world in creating systems capable of operating down to 11000 metres (36000 feet) enabling our scientists to investigate life throughout the world's oceans. We also offer testing and engineering services to industry through the Oceanlab Business Unit. Professor Priede was leader of the expeditions to deep waters south-west of Ireland from 1997-2002. More information can be found at: www.oceanlab.abdn.ac.uk/