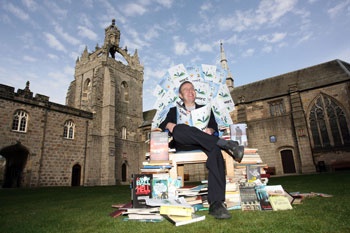 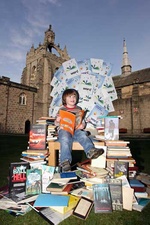 BBC Security correspondent Frank Gardner and The Boy in the Striped Pyjamas author John Boyne are among the literary lights appearing at this year’s Word Festival at the University of Aberdeen.

The Festival programme, which can be viewed in full at www.abdn.ac.uk/word/ also includes writer and comedian AL Kennedy, crime novelist Christopher Brookmyre and Allan Shiach, the Scottish screenwriter and producer.

Playwrights Liz Lochhead and Colin Teevan will appear as part of a new partnership with the National Theatre of Scotland. And there will be a series of events on the remarkable art of Japanese manga as part of the UK-wide Japan 150 celebrations.

Word 09 forms a key part of Scotland's national Homecoming celebrations in the North-east, and will have a headline sponsor for the first time in the shape of leading North Sea oil and gas operator Talisman Energy (UK) Limited.

It takes place from May 15-17, 2009 in the grounds of the University of Aberdeen's Old Aberdeen campus and at some of the major arts venues throughout the Granite City.

An expected 11,000 visitors will be treated to a packed weekend of more than 130 events – twice as many as 2008 – covering poetry and prose, theatre, music, lectures, film screenings, workshops and exhibitions.

Alan Spence, Artistic Director of Word, said: "This is an exceptional year for the Festival, which continues to defy the laws of physics and economics. We've managed to double the number of events from last year, adding even more variety and colour, to make a truly exhilarating mix.

"In this Homecoming year, the Scottish dimension is as strong as ever with events in English, Gaelic and Scots – especially the Doric – and some of the country's finest writers on campus. But we're also truly international in scope, featuring voices from America, Ireland, Spain, Bulgaria, Iran, Japan and Guyana.

"Add to that the sheer energy of the Marathon Oil Schools' and Children's Festival, which has grown again, and it is easy to see why Word continues to play such an important role in the cultural life of the North-east, and Scotland as a whole."

Talisman Energy (UK) Limited Vice President of Legal and PR/CR, Jacquelynn Craw said: "It is an honour for Talisman to be the first ever headline sponsor of the Word Festival. Education and the arts are two of the areas in which we have developed award-winning partnerships with a wide range of organisations, and in that sense Word 09 is a perfect fit for our company.

"We can offer our support for the arts and they in turn have the power to inspire those of us in business. This collaborative approach widens across to the arts and introduces new audiences to everything from poetry and literature to painting and performance, enriching our society along the way."

Professor C Duncan Rice, Principal and Vice-Chancellor, University of Aberdeen added: "We are proud that the Word Festival is now firmly established as one of Scotland's most vibrant and popular literary events. Word continues to make a unique and important contribution to the cultural landscape of the North."

As part of the national launch for Word, an evening reception will also be held in Edinburgh which will be attended by writers, journalists and politicians, including Mike Russell MSP, Minister for Culture, External Affairs and the Constitution.

He said: "This year's Word Festival is packed with a variety of events and is supported by an impressive line up of top class authors, poets and artists.  There really is something for everyone. I am delighted that the festival is part of this year's Homecoming programme and includes a very strong Scottish dimension. The Year of Homecoming celebrates the work of Burns and all of Scotland's achievements and contributions to the world.

"Scotland has such a strong literary history and it is important that we continue to build on this and give our artists platforms on which to inspire future generations. The Word Festival is such a platform - bringing literature to a wide variety of different audiences, children and adults alike and allowing us all to take pride in our creativity and culture."

Tickets for all the events at Word 09 can be booked by contacting Aberdeen Box Office on 01224 641 122 from March 23 or online at www.abdn.ac.uk/word/tickets

Alan Spence, Artistic Director of the Word Festival, will launch the 2009 programme from his 'Throne of Books' with the help of some of Aberdeen's young book fans at The Linklater Rooms from 9.50am on Wednesday, March 18. Please contact Patrick McFall on 01224 272013 to confirm attendance.

The full programme will be on the Word website www.abdn.ac.uk/word on Wednesday, March 18.

Alan Spence, award-winning writer, Artistic Director of Word and Professor in Creative Writing at the University of Aberdeen is available for interview.

Selected writers will be available for interview in advance of the Festival. For further details contact Patrick McFall on 01224 272013 or email p.mcfall@abdn.ac.uk.

Selected photographs of writers, logos and launch visuals are also available on request.