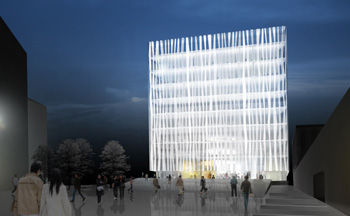 One of Scotland’s most prominent entrepreneurs and businessmen is making a significant personal gift to promote the cultural and international ambitions of the University of Aberdeen and northeast Scotland.

Alasdair Locke, whose business acumen has made a major contribution to Aberdeen's leadership in the international energy sector, has chosen to make a personal gift of half a million pounds to the new University of Aberdeen library.

Mr Locke is executive chairman of the Abbot Group Limited, leading international operator of on and offshore drilling rigs.

The new library, scheduled to open in 2011, will be much more than a mere conventional library. It will provide an important resource for the whole community who for the first time will enjoy access to priceless historical collections of books and manuscripts and regular events, exhibitions, readings and recitals.

Mr Locke said: "The new library at Aberdeen is a major infrastructure project designed to serve all sections of the community and therefore deserving of support from all of us.

"However, for those of us who have been lucky enough to achieve success in business and public life with the help of people from all walks of life in the local community, it is particularly pleasing to have the opportunity to contribute in this way and invest in Aberdeen's future for the benefit of all.

"I am sure that the new library will be an excellent facility and of great value to many in the years ahead."

Mr Locke has supported a number of other educational charities and strongly believes that investing in education is the best thing people can do for the next generation.

Professor C Duncan Rice, Principal and Vice-chancellor at the University said: "I am delighted that Mr Locke has shown such leadership in making a major personal gift to the new library.

"He immediately understood how the library will benefit the communities of the northeast of Scotland, how it will provide significant public access to our rare historic collections, and how it will enhance the profile of Aberdeen as a cultural destination."

Alasdair Locke's gift brings the total raised to £10 million of the £30 million fundraising target towards a total project cost of £57 million. This is before construction has even begun, and is due to the generosity of individuals, businesses, organisations, trusts and foundations worldwide.

The support of individuals and businesses based in northeast Scotland is proving an important component in further strengthening partnerships between the University and the major players in the economic, cultural and public life of northeast Scotland.

Preparation of the site and access roads adjacent to the existing Queen Mother Library is now underway as the search for a main construction contractor nears conclusion. Construction will begin in the spring, with the new building opening for students, staff, and local communities in time for the start of the academic year late summer 2011.