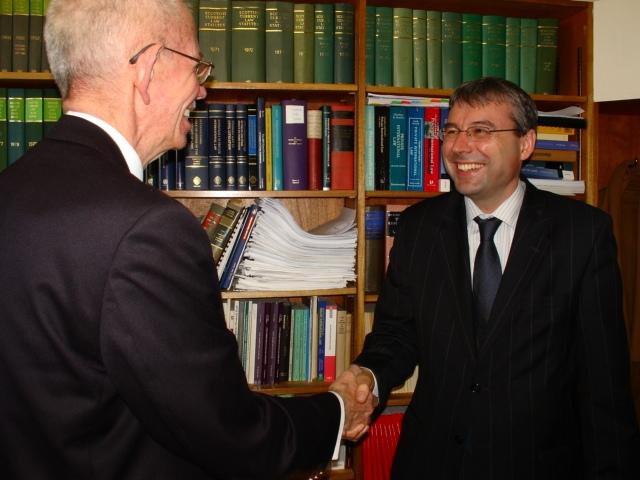 Three University of Aberdeen professors have been elected as Fellows of the Royal Society of Edinburgh (RSE).

Professor of European Union and Private International Law, Paul Beaumont; Royal Society-Wolfson Professor of Soils and Global Change, Peter Smith; and Sixth Century Chair and Director of the University's Centre for Applied Dynamics Research, Professor Marian Wiercigroch, have been honoured with the positions which recognise that they have achieved excellence within their discipline or profession.

The professors are amongst 44 new UK and International Fellows welcomed to the 1500 strong RSE Fellowship, whose key aim is advancement of learning and useful knowledge.

As Fellows, the professors will provide expert policy advice to Government and Parliament, outreach education programmes for young people, and public engagement events including conferences and discussion forums.

Professor Beaumont is the only lawyer among the newly elected Fellows.  As well as an acknowledgement of academic standing, the award is in recognition of his major direct contribution representing the UK and Scotland in treaty negotiation and drafting European Community Regulations concerned with the development of Private International Law.

Professor Smith's Fellowship is in recognition of his contributions to research in the UK and internationally, via the Intergovernmental Panel on Climate Change (IPCC), on climate change impacts, and possibilities for adaptation and climate mitigation, mainly in the agriculture, forestry and energy sectors.

Professor Wiercigroch's Fellowship is in recognition of his contribution to engineering science and applied mathematics, Professor Wiercigroch is internationally renowned for his research in the area of nonlinear dynamics, where he has been successful in transferring abstract theoretical knowledge to engineering problems such as renewable energy, underwater acoustics, fatigue, rotordynamics and vibro-impact systems. He is an inventor of new downhole drilling technology, called Resonance Enhanced Drilling, which has recently attracted £4.6m funding from ITI Energy.

In welcoming the new Fellows, the RSE President, Lord Wilson of Tillyorn, said, "I know that the new intake of Fellows will enhance the already considerable knowledge base of the RSE Fellowship.  We will continue to put this expertise at the service of education and policy development in Scotland, the UK, and where appropriate internationally."

Knowledge".  It is Scotland's National Academy of Science and Letters. Today it has around 1500 Fellows whose expertise encompasses the full spectrum of the sciences, medicine, engineering and technology, education, law, the arts, humanities, social sciences, business, industry, the professions and public service. This multi-disciplinary perspective makes the RSE unique amongst the United Kingdom's learned societies. It is funded by a range of carefully selected charitable, public and private bodies. Its mission today is providing public benefit through the advancement of learning and useful knowledge.