Continue
Fairtrade in the picture at University
06 March 2009 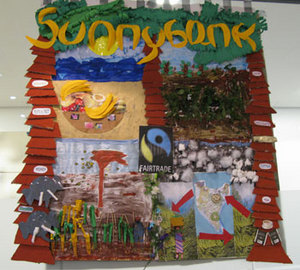 School kids will today be rewarded for putting Fairtrade in the picture at an exhibition at the University of Aberdeen.

A special celebratory lunch featuring a mega pizza and giant cookie is being held for pupils from the city's Sunnybank Primary and Middleton Park Primary at the University's Hub cafe.

The two schools were among eight Aberdeen primaries which produced striking artwork on the Fairtrade theme as part of a series of workshops organised by local environmental charity Creative Waste Exchange.

Using recycled materials from the Exchange, they produced imaginative, large-scale collages illustrating the international initiative which aims to give a fair deal to farmers in developing countries.

University staff and students judged the pictures - which have been on display at the Hub during Fairtrade Fortnight which ends this Sunday - and decided Sunnybank Primary's work was the best reflection of Fairtrade. Middleton Park was the runner up.

University of Aberdeen Fairtrade Committee Chair, Lynne Anderson said: "We were very impressed with the standard of artwork that all the schools submitted. The youngsters produced a very impressive display of artwork and it was very difficult selecting only one winner as they were all so good. We will be using photos of the artwork in future University Fairtrade promotions."

Creative Waste Exchange operational manager Gillian Marr added: "We're delighted to take part in this initiative, highlighting to young people the aims of the Fairtrade movement, and the need for us to think carefully about the choices we make. Pupils have been very interested in finding out more about the issue and were very enthusiastic about producing artwork to illustrate the Fairtrade theme."

The Creative Waste Exchange, part of environmental charity Aberdeen Forward, is an Aladdin's Cave of low cost, good quality craft, office furniture and stationery materials. Stock is donated by local businesses and householders and would otherwise go to landfill.

The Exchange regularly hosts schools visits to its premises at 2 Poynernook Road to promote the value of recycling and reusing materials. A number of schools are now members of the Exchange.

For more about Creative Waste Exchange see: http://www.creativewasteexchange.org/ and for details about the University of Aberdeen and its commitment to Fairtrade see: www.abdn.ac.uk/fairtrade