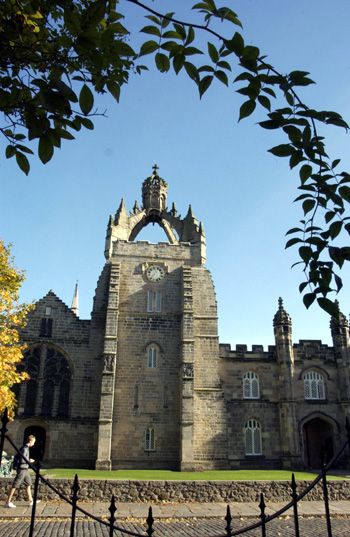 A new book celebrating the 500-year-old buildings of King’s College, Old Aberdeen will be launched this evening (Thursday, March 5).

King's College, Aberdeen: History, Buildings and Artistic Portrayal charts the history of King's College through a series of photographs, illustrations and paintings from down the centuries.

Written by Derek Ogston and Margaret Carlaw, the book will be launched on Thursday, March 5 at 6pm in the Linklater Rooms at the University of Aberdeen.

All profits from the sale of the book will be donated to the fundraising campaign for the new £57 million University library, work on which will begin in late spring.

Professor C Duncan Rice, Principal and Vice-Chancellor at the University, who contributed an introduction to the book, said: "Ogston and Carlaw have produced a wonderful work aimed at all those who belong to Aberdeen or who have passed through the University.

"Old Aberdeen is one of the most distinguished preserved townscapes in Europe. The chapel remains its jewel."

The first section of the book describes the history and development of the King's College buildings from their foundation by Bishop Elphinstone in the early 16th century to the present day. The second part includes images of the College by a number of artists.

Derek Ogston is an Emeritus Professor of Medicine and former Senior Vice-Principal at the University of Aberdeen.  Margaret Carlaw currently farms in the Scottish Borders and formerly pursued a career in education in Aberdeen.

The book is available for purchase from the University's online store at: